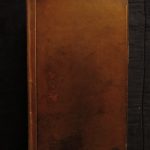 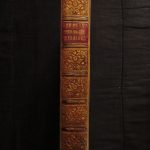 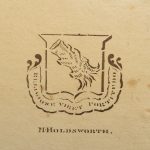 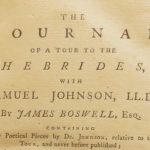 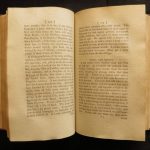 BOSWELL, James. The Journal to a Tour of the Hebrides with Samuel Johnson LL. D.

FIRST EDITION. 8.vo. (1), vii, 524, (1). Roman letters with some italics. With title-page and erratum at the end of the volume. Bound in a modern leather binding with gilt borders, incorporating the original spine. The spine is made of six compartments divided by five raised bands, with floral motifs and label in gilt letters, partially detached. Date inscribed at foot of spine. Stamped bookplate of previous owner on pastedown. A clean copy with some yellowing and mild foxing throughout. An excellent copy.

Although James Boswell’s journey to the Hebrides with Samuel Johnson was made in 1773, this account was only published one year after Johnson’s death. The book was intended to be a preview of the largest and much-anticipated biography of Johnson by Boswell, which was concluded in 1791. The narrative is based on a diary that Boswell kept during the journey with Johnson. Compared to Johnson’s own ‘Journey to the Western Islands of Scotland’ (1775), Boswell’s report is more anecdotal and focused on describing the different society he and Johnson were immersed in during their travel.

This highly-enjoyable account of this journey is the first of many publications promoted by Johnson’s closest friends to celebrate his life and fiery personality. Posthumous publications of this kind include the ‘Anecdotes’ of Mrs Thrale-Piozzi; and the edited volume of Johnson’s ‘Prayers and Meditations’ by George Strahan. During the following years, a number of publications about Johnson’s life will appear in order to counter the ‘Johnson-mania’ (as it is called in one such publication) that was rapidly diffusing throughout the United Kingdom. Because of his eccentric character and unique wit, Johnson’s fame was such that he became the epitome of the learned man among the embryonic British bourgeoisie.

Remarkably, some of his closest friends seemed to be very much aware of Johnson’s destiny as the favourite author of the newly-educated middle class and deliberatedly mocked this fashion by publishing ‘The Anecdotes of the Learned Pig’, where Johnson was compared to one equally successful pig who could grunt at command; and the comic ‘Bozzy and Piozzi, or the English Biographers’, where Boswell (a.k.a. Bozzy) and Hester Piozzi are portrayed while remembering their friend in verses.

Published along with the reprint of Johnson’s own ‘Journey’, Boswell’s ‘Tour’ is an invaluable document for knowing Johnson’s incomparable spirit. From these pages, the most vivid impression of one of the most formidable minds of 18th-century British literature could be found at his best.

[envira-gallery id="9758"] PIOZZI, Hester Lynch. Anecdotes of the Late Samuel Johnson, LL. D. during his last twenty years of his…