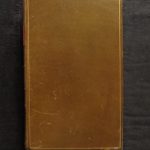 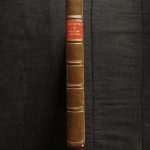 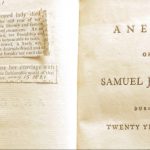 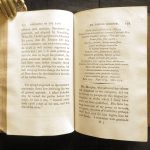 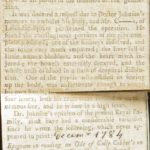 PIOZZI, Hester Lynch. Anecdotes of the Late Samuel Johnson, LL. D. during his last twenty years of his life.

FIRST EDITION. 8.vo. viii, 306, (1). With half-title and title-page. Early newspaper cuttings about the author have been carefully glued on the verso of half-title; and on the last unnumbered page with the addition of some marginal notes. Bound in a modern leather binding with gilt borders and spine in six compartments divided by five raised bands and gilt lettering. A perfectly clean copy throughout. A small tear at p. 25 not affecting the text.

Hester Lynch Piozzi (néé Salusbury) was the daughter of an important land-owner from Wales, who lost most of his fortune in a failed Canadian entreprise. After her marriage to Mr. Thrale, one of the leading beer merchants of the day, she started a circle of literates, artists and writers at their home in Streatham, which included the great painter Joshua Reynolds and other leading figures of the London cultural scene. Samuel Johnson was a constant presence at the Thrales’ residence and the two started a deep friendship that went on for many years. We know that Johnson wrote verses for her and, as we learn from the cutting at the end of this copy, Hester was the only lady who was not pushed back by Johnson’s extravagant and somehow rudish manners. After the death of his first husband, Hester married the Italian singer Gabriel Piozzi and moved to Italy. As the news of Johnson’s death reached her, she wrote this book in order to commemorate his friend, whom she portrays in the most familiar way:

“I am aware that many will say, I have not spoken highly enough of Dr. Johnson; but it will be difficult for those who say so, to speak more highly. If I have described his manners as they were, I have been careful to show his superiority to the common forms of common life. It is surely no dispraise to an oak that it does not bear jassmine; and he who should plant honeysuckle round Trajan’s column, would not be thought to adorn but to disgrace it”.

Mrs. Piozzi’s account is filled with humour and perfectly portrays the many peculiarities of Johnson. By portraying Dr. Johnson at the best of his wit, this book is a moving tribute to one of the most important English literate of all times. The publication of the book was such a success that this first edition, printed in a thousand copies only, went all sold on the same day it was published.

[envira-gallery id="9777"] BOSWELL, James. The Journal to a Tour of the Hebrides with Samuel Johnson LL. D. London, Henry Baldwin,…