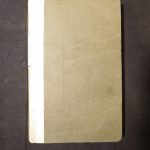 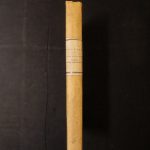 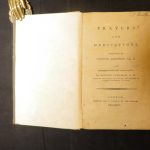 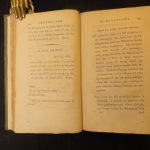 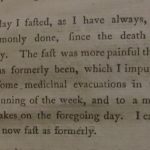 FIRST EDITION. 8.vo; xvi, 227, ad. Title-page inscribed with name of previous owner. Bound in contemporary one quarter ivory cloth over green paper boards. Printed label to spine. No sign of wear or soiling on the outside. On the inside, this is a very clean copy with only a few pencil marks throughout; t-p lightly browned; a worm track not affecting the text runs through pp. xv to 15. An exceptionally well-preserved copy of the very rare first edition of this work by Dr. Johnson.

Before his death in 1784, the great writer and literate Samuel Johnson (1709 – 1784) gave the manuscript containing his religious writings to his publisher George Strahan with the request of publishing them after his death. [1] These invocations written by Johnson for important events were sided by autobiographical notes giving an account of the contingencies, which have prompted him to write them. However, Strahan decided to censor some of the passages of the manuscripts, where Johnson’s Protestant orthodoxy could have been put into doubt. In his preface to this first edition, Strahan warns the reader of his hesitation in publishing – for instance – prayers that Johnson had written for deceased friends, as this did not conform to the Protestant doctrine. At the same time, he also provided the reader with the exact location of the manuscript (Pembroke College Library, Oxford), in order to make the handwritten prayers available to those who wanted to access them more freely. A set of four more prayers from 1752 was published by Strahan in the second edition of this book, following the receipt of new manuscript material.

[1] Johnson further required that the profit from the first edition were devolved to Dr. Bray’s associtation for the diffusion of the Gospel in the English territories around the world

[envira-gallery id="9758"] PIOZZI, Hester Lynch. Anecdotes of the Late Samuel Johnson, LL. D. during his last twenty years of his…