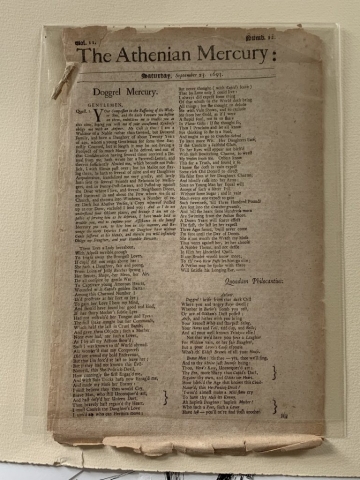 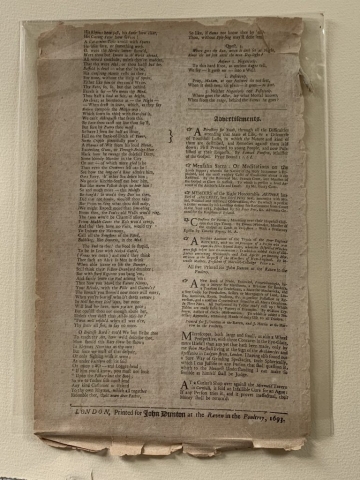 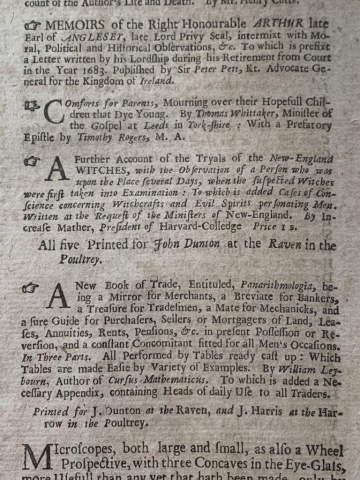 London: Printed for John Dunton at the Raven in the Poultrey, 1693

The Athenian Mercury was a periodical written by the Athenian Society and published in London twice weekly between 17th March 1690* and 14th of June 1697. The publisher John Dunton was the editor in chief. The magazine, a remarkable example of one of the earliest coffee-house periodicals, was originally titled The Athenian Gazette or The Casuistical Mercury. The magazine included miscellaneous information on a wide-ranging variety of subjects, and it was also one of the first to employ the Question and Answer format. A spin-off magazine, The Ladies’ Mercury, was also published by The Athenian Society starting in 1693 which ran for four weeks. This was the first periodical specifically designed just for women. However, already The Athenian Mercury, can be considered in the context of gender representation as many questions regarded courtships and gender relations, as in the case of this issue in which the first question is posed by a woman regarding the courtship of her daughter. The Athenian Mercury also included advertisements for a variety of items, including elixirs, medicines and books. In this issue, amongst advertisements for books, microscopes and an elixir against ague, we find the advertisement for Cotton Mather’s book on the Salem witch-trials which was published by Dunton in 1693.

[envira-gallery id="11558"] HUTCHINSON, Francis. An historical essay concerning witchcraft. With observations upon matters of fact; tending to clear the texts…