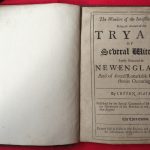 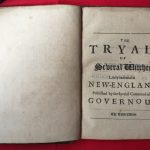 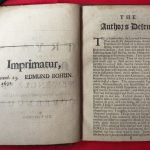 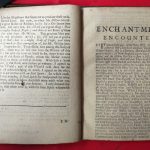 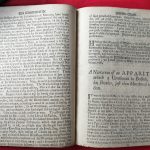 MATHER, Cotton. The Wonders of the Invisible World: Being an Account of the Tryals of Several Witches Lately Executed in New-England and of several Remarkable Curiosities therein Occurring.

Third London Edition. 4to., (194 x 141mm.), A2, B2, B4– [H]4, pp. [8], 9 – 64. Title page backed, half-title including imprimatur on verso; Author’s Defense and Presentation Letter by Chief Justice William Stroughton. Roman letter with some Italic and Gothic type at headings and occasionally within the text. Several small repairs throughout. Lower margins trimmed with occasional loss of catchwords; minimal loss at right margin of G2. Damp staining visible on upper-right corner of a few leaves at beginning and end; mild marginal foxing throughout; browning on initial and final leaves. Bound in fine modern calf, all edges in red. Overall, an excellent copy. 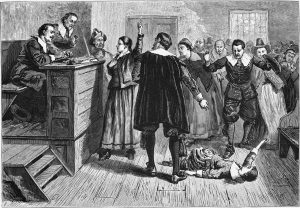 The trials of ‘witches’ that were carried out within the community of Salem in 1692, are among the best-known examples of this infamous social practice of the 17th and 18th centuries. This book contains the first account of these trials written by Cotton Mather (1663 – 1728), one of the leading religious authorities of the second generation of Puritan settlers in Boston. Cotton’s father Increase, was a respected judge in the same community. Although not directly involved in the trials which led to the execution of 19 people, Increase wrote in defence of one of the judges, albeit criticising the importance that the court as a whole had placed on dreams and visions as evidence in the trials.

Cotton Mather, in the preface, presents himself as a simple chronicler of the facts. However, he had been a central figure in the events that led to the staging of the 1692 trials. He had previously written ‘Remarkable Promises’ (1688), an essay against medical materialism and exalting the power of prayer and penitence in the healing of the body and mind.[1] In this essay, Mather passionately defended the existence of witchcraft as a way for evil spirits to harm both the body and the mind of people through humans endowed of “preternatural” powers. However, he later supported his father’s opinion, according to which a too great use had been made of dreams and apparitions as evidence during the trials. 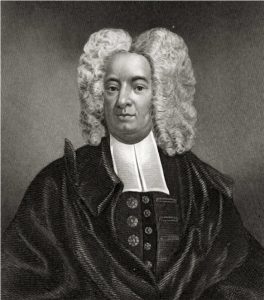 Overall, Mather’s influence over the 1692 trials has been seen by scholars as ambiguous. Although he publicly condemned the frenzied population and tried to dissuade the judges from using visions as evidence, it is also believed that he encouraged acts of violence against those who were found guilty. This is particularly manifest in the case of George Burrough, whose trial is described in the book. In spite of his political influence, he supported the judicial killing of innocent people. However, his call to moderation in carrying out death penalties to the accused has been seen as possibly attenuating the religious hysteria of the times.

Besides being a first-hand account of the trials, this book also contains a wealth of information about the judiciary practices of the English colonies of North America. Furthermore, the book describes the spiritual world of Puritan settlers, in search of a balance between religious and communal zeal on the one hand, and the extreme conditions and fear of the unknown on the other. Through the live voices of the accused emerges the dissent that the religious and civil authorities were trying to repress. Individuals who refused to conform to the strict rules of the community, were often accused of witchcraft and accused of being responsible for any disgrace or illness that befell the settlers.

This is the third London edition, which was printed by John Dunton the year after the events took place. It is a complete and excellent copy of a very rare edition of this book, which interest is paramount for researchers.

[1] Curiously, Mather was in favour of the inoculation of smallpox, a medical procedure that pre-dated vaccine and which had been criticised by many Puritans. The criticism did not stop him to support this procedure, the efficacy of which was later recognised and widely adopted.