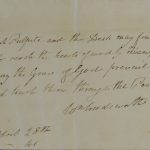 WORDSWORTH, William. ‘Though Pulpits and the Desk May Fail…’

Autograph manuscript poem signed in a neat hand in brown ink. 227 x 180 mm, folded in half. Contained in a morocco slipcase. Excellent condition.

This poem was written by Wordsworth, when he was in Bath for the marriage of his daughter Dora on 11th May 1841. The poem is seen to be one of Wordsworth’s statement about the role of poets in their society and in the spiritual salvation of the modern man.

“Though Pulpits and the Desk may fail
To reach the hearts of worldly Men;
Yet may the Grace of God prevail,
And touch them through the Poet’s pen”.