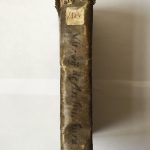 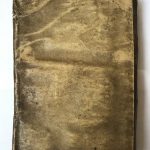 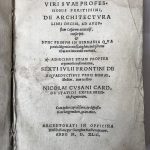 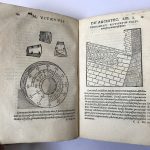 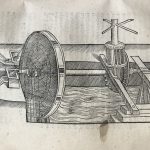 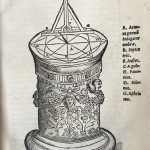 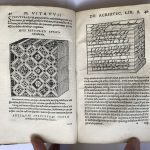 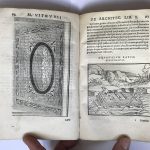 This is the rare first edition of Vitruvius printed outside of Italy for the very first time. This first German printing of Vitruvius was edited by Walter Hermann Ryff (d. 1548), a Strasbourg physician, mineralogist and mathematician who spent most of his life in Alsace, Nuremburg and Würzburg. The majority of the woodcut illustrations are based on Cesare Cesariano’s Como edition (1521). A few others are copied from Giocondo’s edition as well as the fourth book of Serlio. In this present Latin edition Ryff quotes many authors, such as Alberti, Luca Pacioli, Serlio, Philandrier, Dürer, the mathematicians Pedro Nuñez and Oronce Fine, Niccolò Tartaglia, and others. But his main source is Cesariano’s Italian edition. Ryff emulated the taste of the Italian for long digressions and abundant annotations. However, he excels over Cesariano for the greater lexical precision of his translation. The humanist shows his vast culture, indulging with quotations from Virgil, whom he does not hesitate to annotate.

A second edition of Ryff’s Vitruvius was issued in 1550, this time translated in German. The present Latin edition of the ‘Ten Books on Architecture’, printed by Johann Knobloch, is the first of four corresponding publications. Particularly noteworthy in Ryff’s edition is its scientific apparatus and the hitherto unequaled comprehensive, alphabetical and systematic keyword index. The introduction was written by the head of the Knobloch office, Georg Messerschmidt (1515-1566) and “Contrary to other assessments of literature, the superiority of the Strasbourg edition in terms of illustrations must be pointed out, at least in comparison to the small Giunta edition available at the time” Werner Oechslin, ‘Vitruvianism’ in Germany, in: Architect & Engineer (Ausstellungskat HAB Wolfenbüttel), pp. 53, No. 34.