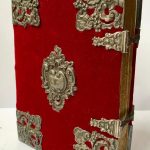 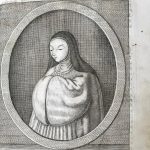 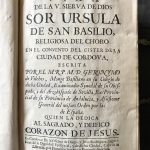 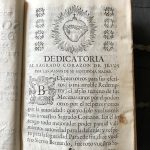 FIRST EDITION. 4to; pp. (xxviii), 674, (vi). One leaf with engraved portrait of the nun by Juan Diaz on recto, Roman letter, sporadic Italic. Attractive large head- and tail-pieces, decorated woodcut initials. Rebound in modern red velvet over wooden boards, as it was originally, preserving its silver corner- and centre-pieces with the Sacred Heart of Jesus etched on, clasps and catches edges gilt and gauffered. Text clean and crisp. An extremely fresh and lovely copy.

First and only edition of this biography of Ursula of Saint Basil (1733-1761). Ursula was a nun in the Cistercian Monastery of the Immaculate Conception born in Pozoblanco, who died at the age of twenty-eight. The author of the book was Girolamo de Vilches, a monk of the monastery of San Basil in Cordoba, who refers to her devotion as a “multitude of proofs of the most virtuous virtue” and “giving an account of her death show the great sentiment that caused the loss of a religious so exemplary and so holy in Cordoba.”