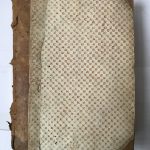 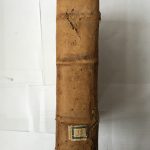 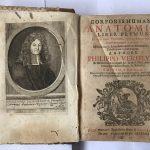 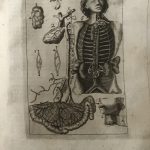 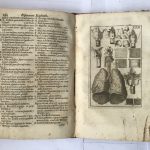 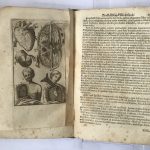 4to, pp. (xx) 403 (i), a4 b6 A-3E4 3E2. Roman and Italic letter. Two volumes (volume one only, missing Liber Secundus or Supplementum, which is a textbook on physiology containing 6 additional plates). Engraved portrait of the author on frontispiece (“A.M. fe.[cit]”); woodcut printer’s device of a phoenix within a floriated shield sided by putti, motto “semper eadem” in a cartouche, and entwined initials on title page (signed by the artist Giovanna Pesche). Title in red and black. Library stamp on t-p. Decorated initials, head- and tailpieces. Forty detailed anatomical plates. Plate twenty with a marginal tear and tear to lower corner of F3 (pp. 45-46). Wormhole through foot of frontispiece and first four leaves, slightly affecting the date of publication. A little soiled and spotted, some light foxing and age yellowing throughout. In contemporary half calf with paper over boards. Small wormholes on covers and especially joints and spine, also visible on pastedowns; sign of rubbing on binding, spine and cover edges worn. Remains of a library label with initials “D.V.” on front pastedown.

This is the third edition of a successful anatomical work by the famous Flemish surgeon Philippe Verheyen (1648-1710). He was probably of humble origins and it is believed that he learned to read and write at the local parish school. Local anecdotes claim that he had such a brilliant memory that he could recite the pastor’s sermon by heart after attending mass on Sunday. Because of his bright intelligence, the pastor of the village took him under his wing and Philippe was sent to Leuven in 1672 where he spent three years at Trinity College. Concluding his studies in the liberal arts in 1675, Verheyen went on to study theology with the intention of following in the footsteps of his mentor. An unexpected illness resulted in the amputation of his left leg, which would render him unfit for the clergy. However, this event proved to be life-changing. Embarking on a career in medicine, he initially continued at Trinity College before moving to Leiden, from 1681 to 1683. He returned to Leuven in 1683, obtaining the doctorate in medicine there. He gave lessons in anatomy and surgery and also practiced medicine. As a result of his many publications, he acquired renown both inside and outside the country. The year 1693 saw the first publication of his ‘Corporis humani anatomia’, whose illustrations are mainly based on Andreas Vesalius’s De humani corporis fabrica (1543).