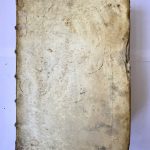 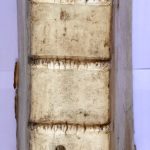 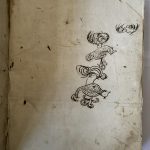 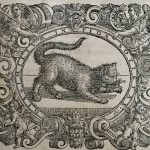 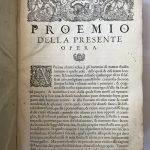 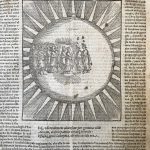 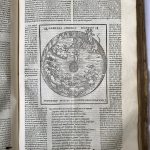 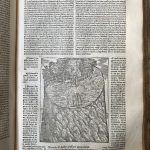 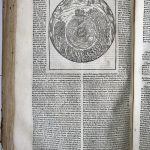 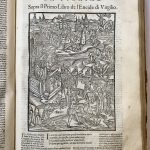 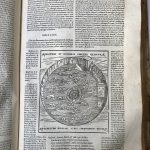 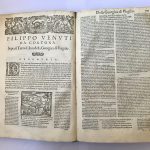 Folio, ff. 450; A-D8 E4 F-Z8 2A-3K8, last blank missing. Three works in one volume. Roman and Italic letter. Double-column, Decorated initials, head- and tailpieces, large printer’s device (a cat with a mouse in mouth and motto “dissimilum infida societas”) on t-p within elaborate borders. 40 illustrations: 11 woodcuts in the Eclogues, 4 in the Georgics, 12 large or full-page images, one for each first page of each book of the Aeneid, plus a set of 13 famous illustrations of Dante’s Inferno only for book no. 6. Slightly browned, occasional spotting and burnings, some waterstains, thumb marks and offsetting. Final three leaves worn with hole affecting part of the text, particularly on the last leaf. In contemporary vellum over boards, rubbed and damaged at corners and edges, curious ink decorative scribbles on both covers and on recto of front endpaper, representing peacocks.

The beautifully illustrated third edition of this important Italian translation of Virgil’s works by the three sixteenth-century maximum experts of the Latin poet: Giovanni Fabrini, Carlo Malatesta, and Filippo Venuti; also provided with their commentaries. In this beautiful work, there were used the woodblocks of the 1519 edition, which were modelled on the illustrations of the celebrated Strasbourg version printed by Gruninger (1502). The sixth book of the Aeneid shows the same illustrations used in the Vellutello edition of Dante’s Divina Commedia (Marcolini 1544).