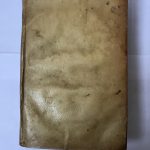 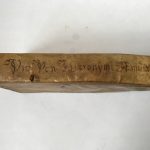 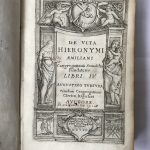 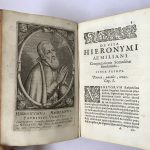 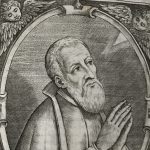 This is the first edition of this work in Latin by Agostino Tortora, who was General of the Somaschi Fathers, the ecclesiastical congregation founded by Girolamo Emiliani (1486-1537). This biography of the Saint in divided into four books. Born to Angelo Miani e Dianora Morosini, both members of important senatorial patrician families of the Republic of Venice, Girolamo had a reckless and troublesome youth. According to tradition, he indulged in all the pleasures of life and became a soldier fighting in the early C16th Northern Italian wars against the invading French army. Only once made captive, he embraced religion, after long solitary meditations in prison. Somasca was the secluded hamlet where Girolamo started his new life as a cleric. He stated the principal work of the community was the care of orphans, poor and sick, and demanded that dwellings, food and clothing would bear the mark of religious poverty.