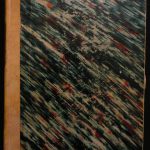 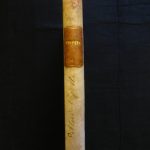 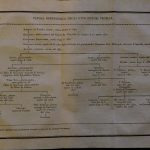 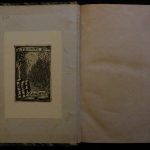 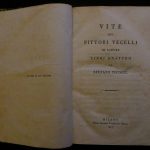 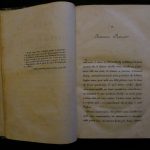 8vo. 22 x 15 cm. (8), 336 pp. With half-title and title-page. Cursive italic in the introduction. Quarter ivory leather and paper over boards. Spine with gilt label bearing the author’s name; title added by hand longitudinally. Bookplate with motto “Tramite Recto” and initials ‘G. C’. Includes a folded genealogical tree for the Vecelli family. No markings within the text.  Except for very minimal wear to outer corners; and some foxing throughout the text-block, the conditions of this copy are excellent.

This work is a chronicle of the Vecelli family’s history between the 15th and the 17th century. This essay was written by Stefano Ticozzi, a talented historian who devoted most of his intellectual production to art history. This book had a tremendous amount of research made, for Ticozzi had to travel far and wide to discover unrecorded or minor works by the Vecellis. However, his historiographic effort was somehow lessened by the hard criticism this book went through from another Italian intellectual of the time, Andrea Mayer, who contested Ticozzi’s approach in considering Titian the best imitator of nature ever existed. Although Ticozzi ignored Mayer’s reproach, a third specialist, Giuseppe Carpani, went on defending Ticozzi’s theories against Mayer’s. The debate between the two continued for years, until the death of Carpani, who eventually bequeathed a bust of Canova to his rival-friend Mayer as a sign of his goodwill.

The bookplate on the first pastedown bears the motto “Tramite Recto”. This was one of the many mottos that were created by the Italian ‘vate’ Gabriele D’Annunzio, whose adventurous life and closeness to the fascist regime have made him one of the most controversial characters of the Italian Novecento.