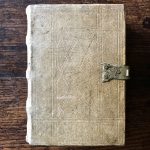 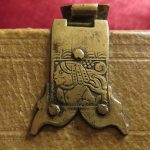 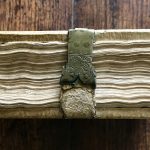 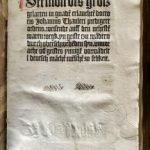 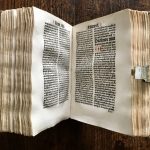 FIRST EDITION. Quarto. 290 leaves: 281 numbered leaves (ff. I – CCLXXXI); 8 unnumbered leaves (title-page and index). Gothic letter. Two 36-line columns. 8-line opening title on upper half of first leaf; 7-line capital space with a large rubricated initial at the beginning of the first sermon, several 3-line capital spaces with small printed guide-letters throughout. Completely rubricated with numerous painted Lombard initials, which were added on top of the printed guide-letters in bright red ink. Some occasional offsetting of red ink. Occasional marginalia in an early hand. Bound in contemporary blind-stamped pigskin over wooden boards, spine with three low-raised bands covering thick double sewing supports. Original brass clasp and catch, closing on the left board, both decorated with etched sphinxes. Geometrical frames on covers, lines arranged in a hatched or lozenge design within central panels, and imperial eagles tooled within the four-square sections at the corners. A nicely rubricated and clean incunabulum; only two small repairs to blank foot margins of title and second leaf. A fine copy.

This is the first printed edition of the Sermons of Johann Tauler (c. 1300 – 1361), one of the great Rhineland mystics of the fourteenth century. He was educated in the Dominican convent of Strasbourg, where Maister Eckhart was giving lessons in theology in the same years. After completing his studies, he returned to Strasbourg and started his career as a preacher for the Dominican convents of the city. As a result of the tensions between the papacy and the Emperor Louis IV, the Dominicans were forced to leave Strasbourg and Tauler found refuge in Basel. Here, he became acquainted with the ‘Friends of God’ (Gottesfreunde), a movement of priests and laymen for the spiritual renewal of the Church. Their teachings were taken from Eckhart’s sermons and other mystics’ such as Henry Suso and Mechthild of Magdeburg and they were deeply influenced by the Beghard movement, which was later regarded as heretic.

This book collects the complete sermons of Tauler, including four sermons by Maister Eckhart, also printed for the first time.[1] The sermons are followed by an account of Tauler’s life probably written by Rulman Merswin (c. 1307 – 1382), the leader of the Friends of God.[2] In this short biography, the anecdote of the learned man’s conversion to the more experiential spirituality of the Friends of God by the mysterious “Layman from the Oberland” is told for the first time. This will be later repeated in Merswin’s autobiography The Story of the First Four Years of a New Life. Tauler’s teachings remained popular throughout the fifteenth century and his undogmatic approach to spirituality was later taken up by Martin Luther. His writings are widely considered to be one of the best achievements in German prose of the fourteenth century. His sermons encouraged the faithful to find God’s presence within themselves rather than looking outwards. He further implied that the adoption of a perfect lifestyle could lead to experiencing unity with God in this life.