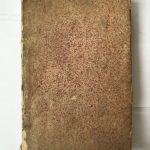 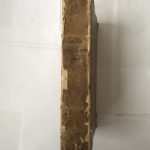 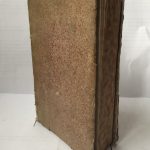 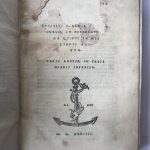 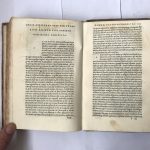 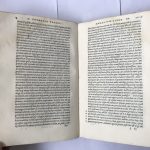 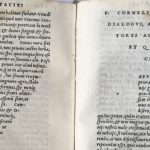 FIRST ALDINE EDITION. 4to, ff. (xii) 260, *8 2*4 a-h8 i4 k, L, M, n-z, A-K8. Italic letter, little Roman. Aldus’ device on title page and verso of final leaf. Capital spaces with small guide-letters. Upper part of book affected by heavy dampstaining, which originated from mould and damaged the paper; extensive worming, with holes and tracks going through the whole text block. Initial quire with large repairs to head on each leaf. Title page and index with losses of text. Early underlining and occasional marginalia on the last three Tacitus’s works included in the book: the mores of the German peoples, the dialogue on oratory, and the life of Gnaeus Julius Agricola. In a worn, most attractive C19th paper over thin boards with ink title to spine.

This is the sole Aldine edition of the works of the Roman historian and orator Tacitus (AD 54-120). Because of substantial revisions and corrections, this edition marks a decisive improvement compared to preceding editions such as Froben’s (1533) and Beatus Rhenanus’s (1515). The opening part of this volume is dedicated to the ‘Annales’ (or Annals), a history of the Roman Empire from the reign of Tiberius to that of Nero. The Annals are widely considered Tacitus’s finest work and one of the earliest Roman historical sources to mention Christ within the context of Nero’s persecution of Christians.

However, this first Aldine edition also includes other texts:

The volume concludes with two commentaries on Tacitus, including one by Andrea Alciato, an early Milanese civil lawyer and legal humanist.