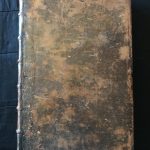 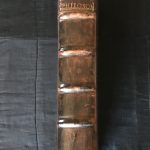 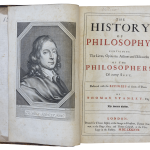 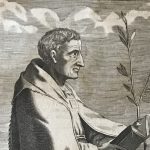 STANLEY, Thomas. The History of Philosophy: containing the Lives, Opinions, Actions and Discourses of the Philosophers of every Sect. Illustrated with the Effigies of divers of Them. The Second Edition.

Folio, pp. [xxviii] 1091 [i] including engraved portrait frontispiece. T3 (pp. 141/2) bound before T2 (pp. 139/40). Title in red and black. 26 engraved portraits of philosophers, a small engraving of a coin, an engraving of the orbits of the sun and planets around the earth, and a small woodcut musical illustration, all in text. Light age-browning, tears to X1 and 2C2, with no loss, bound in contemporary boards, rubbed, recently but sympathetically rebacked, red morocco gilt label. Inscriptions of Thomas Pindar, the first (on recto of front free endpaper) dated Kempley Court, June 30th 1690. Name-label bookplate on pastedown of Dr Gustavus Hinrichs.

“In its account of ‘Those on whom the Attribute of Wise was conferred’ in antiquity, with particular attention to Thales, Solon, and Socrates, the first volume established the pattern of “Lives and Opinions” followed in the later volumes. Volume 2 […] included detailed accounts of the philosophical doctrines of Plato, Aristotle, and Stoicism […] and volume 3 […] encompasses Pythagoras and the pre-Socratics, Scepticism, and a particularly detailed and sympathetic account of Epicureanism […] In these three volumes Stanley sought to give a comprehensive account of the various schools of Greek philosophy, in as impartial a way as possible. A fourth folio volume, The History of the Chaldaick Philosophy […] is briefer and more tentative in treating the occult learning of ancient Egypt, Babylonia, and Persia […] Stanley’s History of Philosophy was accepted as a standard authority for many years”. Warren Chernaik, ‘Stanley, Thomas’, Oxford Dictionary of National Biography, LII, pp. 240–243).

Provenance: 1) from the collection of Thomas Pyndar: “Reginald Pyndar settled much of the estate in 1686 on the marriage of his son Thomas and Elizabeth Hacket. Thomas, who rebuilt the old manor house (Kempley Court), succeeded to the manor on Reginald’s death in 1712 and left it to Elizabeth at his in 1722.” (https://www.british-history.ac.uk/vch/glos/vol12/196-222); 2) Gustavus Hinrichs (1836 – 1923): a physics professor from the University of Iowa and founder of the Iowa Weather Service.