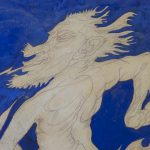 SIGNED PENCIL DRAWING on paper. A figure of a faun with a background in an intense blue tempera paint on recto; a profile of a man on verso. Signature ‘AOS’ on lower margin.

This drawing relates to Spare’s ‘grotesque’ mode, which was used in his ‘Book of Ugly Ecstasy’ (ca. 1924) and ‘A Book of Automatic Drawings’ (1925). Crowley was an admirer of Spare’s art and commissioned him to execute a number of illustrations for his own publications.