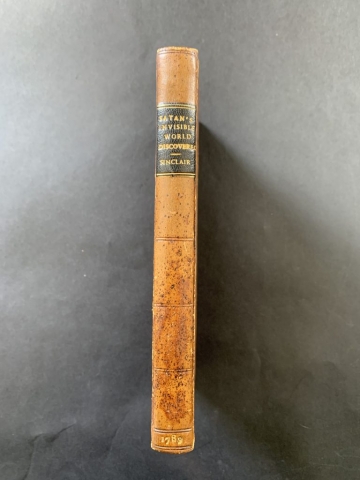 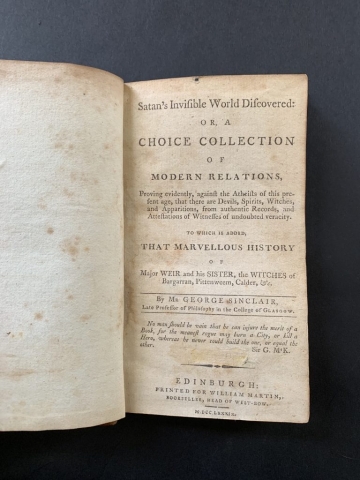 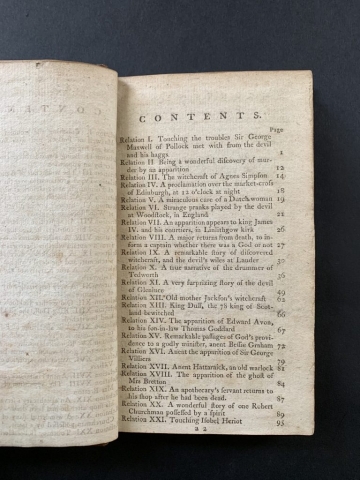 SINCLAIR, George. Satan’s Invisible World discovered: or, a Choice collection of modern relations, proving … that there are devils, spirits, witches, and apparitions … To which is added, that marvellous history of Major Weir and his sister, etc.

George Sinclair (d. 1696) was the first Professor of Mathematics at the University of Edinburgh, an engineer and demonologist. In 1666 he was removed from his post at the University for being a Presbyterian and thus started working as a surveyor and engineer, particularly for Sir James Hope. He was eventually reappointed Professor of Mathematics in 1691.

An author of many books on different subjects, Sinclair’s most famous book is undoubtedly Satan’s Invisible World Discovered, first published in 1685. In this work Sinclair describes the poltergeist incident of the Devil of Glenluce, which was alleged to have terrified the household of the weaver Gilbert Campbell between 1654 to 1655. Alexander Agnew, a beggar who was refused a handout by Campbell, promised to cause the family harm and since then strange phenomena started happening in the house. These included demonic voices, strange whistling sounds, stones being thrown, and warp thread being cut. Sinclair described the incidents as having a usefulness for refuting atheism, as evidenced by the title page of the book itself.

Sinclair’s source for this story was Thomas, a philosophy student at Glasgow University and  son of Gilbert Campbell. It was later suggested that it was Thomas who had produced the supernatural phenomena through fraudulent means.

[envira-gallery id="11586"] CRUIKSHANK, George. A Discovery concerning Ghosts; With a Rap at the “Spirit-Rappers”. Illustrated with cuts. Dedicated to the…