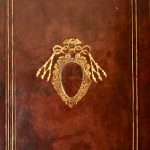 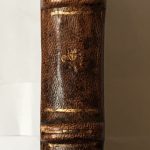 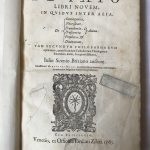 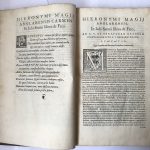 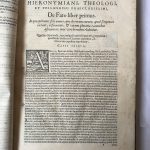 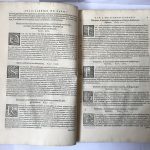 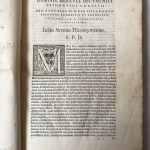 This is the first and only edition of Serina’s ‘De Fato’ (Concerning fate), which begins with a dedication letter to Cardinal Ercole Gonzaga, primary papal legate at the Council of Trent. It follows a Latin poem and the Perioche, that is, abstracts of the selected extracts included in the nine books of Serina’s work, which was edited by Girolamo Maggi. Tables of contents help the reader going quickly through the nine books of the essay. Born in Brescia, Serina was a philosopher and theologian, and a cleric of the Order of Saint Gerome of Fiesole. He became the General of his Congregation three times. For forty years he lectured in metaphysics, theology and philosophy at the University of Bologna, where he died in 1593.

The editor of this book, the polymath Girolamo Maggi was born in Anghiari in 1523. He heroically died of strangulation by the hand of the Turks in Constantinople, in 1572, after the failed capitulation of the city of Famagosta in Cyprus, which was still under the Ottoman rule. The book discusses the nature of fate through the consideration of those events that are determined by “casualty” or “necessity”. However, he theorised of events determined by “contingency”, in which casual and necessary causes work together.