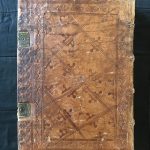 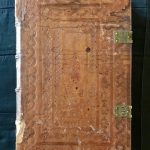 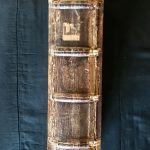 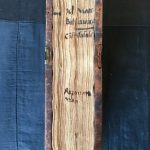 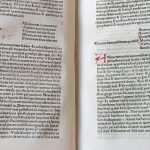 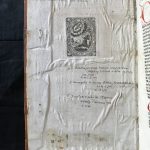 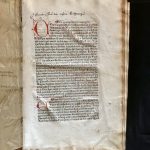 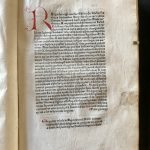 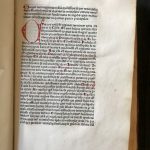 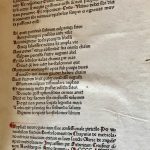 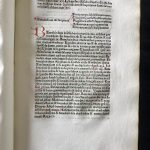 Folio (311 x 205 mm). 3 works in 1 volume: ff. 48, blank, 116, blank, 111. Gothic letter from different sets of types. Capital spaces with large 6-line rubricated initials at the beginning of each work and paragraphs starting with 3-line rubricated initials. Entirely rubricated throughout with occasional underlining, strokes, attractive schematic diagrams and maniculae, also in red ink. Very occasional short manuscript notes on margins (among these, early numerical quiring in red marking the first leaf of a few initial gatherings). Some light marginal foxing and mild spotting at beginning and end. Two original contemporary parchment tabs separating the works. Early handwritten titles to fore- and lower edge of text-block. Early ms. inscription to head of first printed leaf: “Ex conventu Fr[atr]um min. reform. Bolsanensium” and bookplate of the Franciscan Friary of Bolzano, South Tyrol (Italy). Bound in contemporary blind-stamped calf over thick wooden boards, bevelled at central part of both hinges. Front cover decorated with four concentric panels divided by three-fillet borders, each one filled with geometrical or floral motifs. The outer border shows interlaced cartouches inscribed with the name of the Virgin Mary. Rear cover with floral motifs and decorative arrangement of a different kind. No catches, only original metal clasps, probably cut from a unique piece of metal, etched with the name of the Virgin and flowers. Lacking bosses. Spine head refurbished, loss of leather at foot. Spine with remains of abraded library paper labels with ink lettering, split joints, four raised bands with double sewing supports visible and still holding the boards tightly together. An extraordinarily well-preserved copy in its original binding suggesting strong connections with the cult of Mary. The leaves are clean and wide-margined. A magnificently  rubricated copy.

This volume brings together three early editions of Franciscan texts of the 15th century dealing with Christian morality.

The “Quadragesimale” is an anonymous work and the earliest of only two editions recorded on ISTC. It was meant to be an aid for the faithful while enduring the observance of Lent, which originally involved fasting, abnegation and a strict discipline of prayers for forty days before the Easter Sunday. On the day of Easter, which symbolises the Resurrection and the Glory of Christ, fasting is traditionally over. By commenting on and making reference to the bible and other religious texts, this work provides explanations to the spiritual “traveller” (viator) who must imitate the example of Christ during his last days before the Crucifixion. It gives edifying help and advice, encouraging the believer during the harsh penance. This “Quadragesimale viatoris” is rare. The present edition has not been on the open market for more than forty years.

The second work was written by the monk Antonius Rampigollis, of the Order of Augustine Hermits in Naples, and Bindo de Senis. It is a famous compendium of virtues and vices found in the Christian Bible, which are listed in alphabetical order and fully expounded through diagrams and biblical references. A short prologue precedes the text. The rubrication of this work, with its curious schematic lists and simple diagrams, is outstanding. Rampigollis distinguished himself at the Council of Constance in 1418 by his disputations against the Hussites. He also wrote, for the use of the novices of his order in the monastery at Naples, another work that later, during the Reformation, was strongly censored by Antonius Possevinus. It was listed in the Index of Forbidden Books and was printed several times in Paris and elsewhere.

The third work is a treatise on the confessional and a guide to the administration of the last rites to dying people, according to their age, profession and social status by the Milanese monk Bartholomaeus de Chiamis, who was a pre-eminent figure in the Franciscan convent of S. Maria degli Angeli.

[envira-gallery id="7736"] ERTZ, Klaus. Jan Breughel the Younger (1601-1678) The Paintings with Oeuvre Catalogue (Flemish Painters in the Circle of…