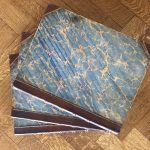 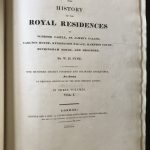 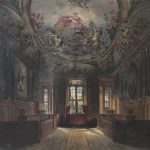 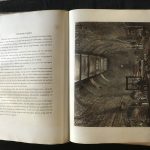 Large 4.to, three vols., pp. 585. Illustrated with 100 highly finished and hand-coloured engravings, and facsimiles of original drawings. Bound in half calf, with gilt lettering and decorative detail.

All aspects of the Royal residences are described in this work, from the kitchen and general running of the household to individual items of furniture. The work culminates with an alphabetical list of portraits in the Royal Collections described in the book and a list of plates. Pyne provided the text and the drawings were supplied by eminent artists such as Nash, Pugin, MacKenzie amongst others. Though the work had some success, it involved Pyne in serious financial difficulties, and he was on more than one occasion confined for debt in the King’s Bench prison.