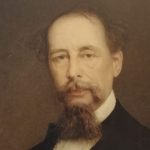 Oil on canvas, 48.5 x 59 cm. A bust portrait of Charles Dickens from a photograph by John Watkins, which was taken in 1861. Although the attribution of this painting is obscure, the high quality of the painting, together with the accuracy of details such as the colour of the novelist’s eyes, would point to a distinguished artist of the time.

Charles Dickens was extremely aware of his public image and would have his portrait been made only by artists whose artistic qualities he respected. Around the time Dickens went to the famous Watkins’ brothers photographic studio for the first time, he was also having his portrait been made by his friend William Powell Frith. The final result of this portrait (now at the V&A) had left the great author rather unsatisfied. Kitton (1890) refers that further attempts to make another portrait from the Watkins’ photographs were carried out by Frith but with no success.

This portrait of Dickens has been exhibited in 2012 at the Bodleian Library for the bicentenary of Dickens’ birth. A photograph of this painting is in the National Portrait Gallery in London.

For the V&A Description of Frith’s portrait, see: http://collections.vam.ac.uk/item/O17333/charles-dickens-oil-painting-frith-william-powell/

[envira-gallery id="11393"] MATHER, Cotton. The Wonders of the Invisible World: Being an Account of the Tryals of Several Witches Lately…