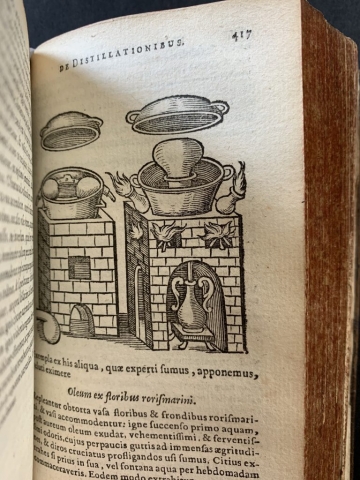 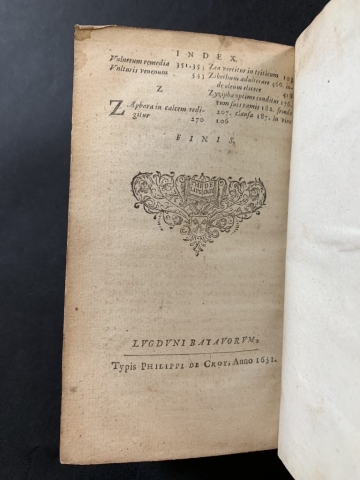 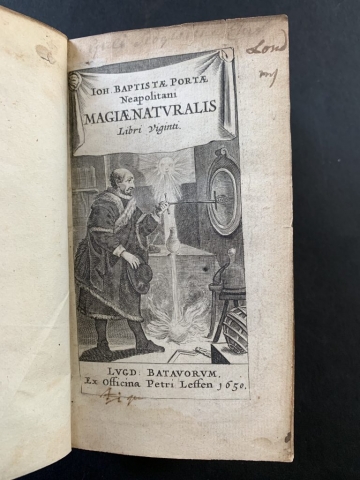 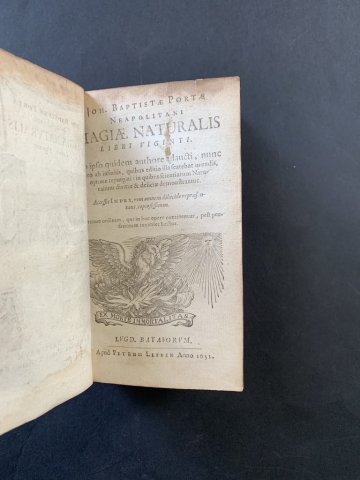 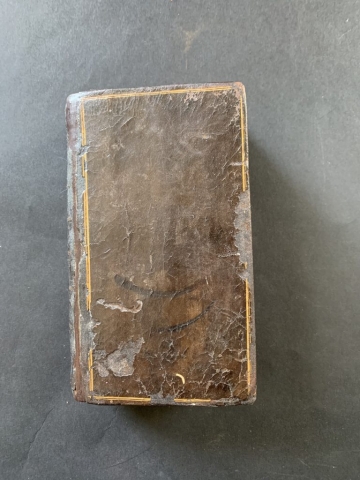 12° (14 x 8.5), [ix], 670 pp., [xii]. Additional engraved title page, dated 1650 with small handwritten inscriptions of previous owner; title page with Pierre Leffen’s printer’s device; dedicatory letter and preface; index at the end of the volume. Printer’s device of Philippe de Croy on final index page. Roman letters, in Latin. Numerous woodcut illustrations and tables in the text and floriated initials at the beginning of each book. Right margins trimmed with occasional loss of word in the preface [vii, viii]; small tears on upper and right margins of engraved title page, title page and dedicatory letter. Tightly bound in dark calf, slightly cracked; simple gilt decoration on the front and back and on the spine; edges in red. A fine and very clean copy.

Giambattista della Porta (1535 –1615) was an Italian philosopher, alchemist, comedy writer, scientist and polymath. He was the author of a number of works on memory, physiognomy, philosophy and magic. The Magiae Naturalis, or Natural Magic, was originally composed of four books and it was first published in 1558. It was then expanded to twenty books in 1589. The work was popular in Europe and it was translated in modern European languages (Italian, French, Dutch and English).

The work deals with popular science, cosmology, geology, optics, plant products, medicine, poisons, cooking, alchemy, distillation, glass colouring, glazes and ceramics, magnetic properties, cosmetics, gunpowder and cryptography. Giambattista della Porta draws both on the works of Ancient authors, such as Aristotle and Theophrastus, and contemporary works on magic and science but avoids discussing religion and ceremonial magic. Porta defends natural magic, distinguishing it from the superstitious he deems of demonological origin, by extending its field of investigation to philosophy, hoping to translate it into action. For Porta, magic was not a way to improve one’s self and to communicate with the divine, but a means to manipulate both men and things with crafty tricks. The natural magus is described by Porta as a trickster with the experience of the alchemist, with the education of a humanist and with a strong command of mathematics and astrology. According to Porta, as outlined in the second chapter of the first book of the Magiae Naturalis (Quid fit Magia) the magus must be rich, well-educated and hard working. In this work, we find points of contact with Agrippa von Nettesheim’s De occulta philosophia.

[envira-gallery id="11393"] MATHER, Cotton. The Wonders of the Invisible World: Being an Account of the Tryals of Several Witches Lately…