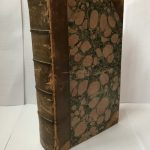 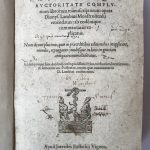 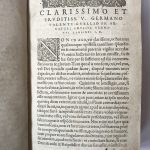 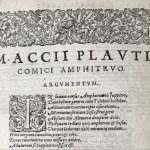 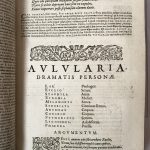 This is the unequalled Lambin’s (Lambinus) edition of the works of Plautus, which originally appeared in 1576. “The celebrity of Lambinus in almost every classical work which he edited, has already been frequently noticed. Of this admirable edition, Lambinus lived to finish only the first twelve comedies; but his colleague, Helius, professor of Greek, completed the work, partly by transcribing what remained in Lambinus’s hand-writing on the subsequent comedies, and partly by the insertion of his own notes, and emendations of the text. In forming the edition, many MSS. And ancient publications were consulted”. “In this excellent edition of Plautus”, says Harwood, “Lambinus hath manifested great learning and critical sagacity” (see T. F. Dibdin, An Introduction to the Knowledge of Rare and Valuable Editions of the Greek and Latin Classics, 1804, pp. 299-300).

“Denys Lambin, or Dionysius Lambinus (1520-1572), won a wide reputation by his great editions of Latin authors…His knowledge of Cicero and the older Latin writers, as well as the Augustan poets, has never been surpassed and rarely equalled” (see J. E. Sandys, A Short History of Classical Scholarship, 1915, pp. 220-21).