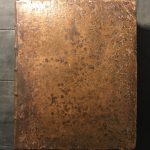 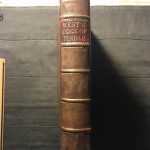 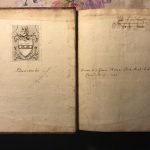 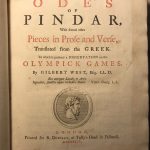 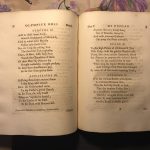 PINDAR et al.; WEST, Gilbert, (Ed. and Tr.). Odes of Pindar, With several other Pieces in Prose and Verse, Translated from the Greek. To which is prefixed a Dissertation on the Olypmpick Games.

FIRST EDITION. Large 4to, pp. (xxviii), ccvi, (ii), 315, (iii). Roman letter, some Italic. Title in red and black. Tondo with profile of Pindar on title-page, capital spaces with guide-letters. Bookplate on front pastedown, probably of the Penn family, and “Duncombe” handwritten underneath. Ms. note by the same hand on front endpaper: “From his Grace Thomas Lord Arch-Bishop of Canterbury 1749”, referring to the ownership of Thomas Herring (a. 1747-57), who was Archbishop of Canterbury at the time. In contemporary calf, rebacked. Gilt spine and edges. red morocco spine label, lettered in gilt. A crisp, excellent copy.

In addition to the dissertation on the Olympic Games and Pindar’s Odes, this work includes translations of Horace, Euripides, Lucian, and other classical poets. Though Gilbert West’s Odes of Pindar is only the third version of these poems to have been translated into English (the first by Sternhold and Hopkinsin 1713), his translation was arguably the most popular version in the eighteenth century. Just several months after this publication, the poet Joseph Warton wrote “An ode, Occasioned by reading Mr. West’s Translation of Pindar”; and some scholars have suggested that Thomas Gray’s Pindaric Odes, written at the beginning of the 1750s, are to some extent in conversation with West’s translation. In Lives of the English Poets (1779), Dr. Johnson praised West’s Pindar: “Of his translations I have only compared the first Olympick ode with the original, and found my expectation surpassed, both by its elegance and its exactness…A work of this kind must, in a minute examination, discover many imperfections; but West’s version, so far as I have considered it, appears to be the product of great labour and great abilities”.