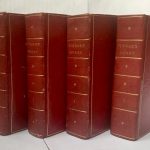 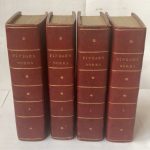 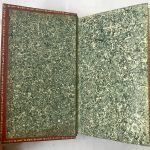 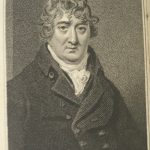 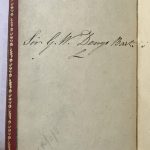 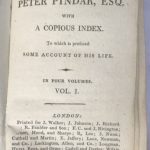 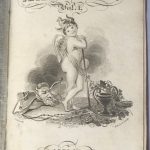 12mo. Four volumes, each one with half-title and frontispiece; engraved title-page with Peter Pindar’s portrait on the first volume. Ms. ex libris of Sir George-William Denys, Baronet, on front endpaper of each volume. Bound in a lovely gilt-ruled straight-grain red morocco (fourth volume with some worm tracking on front cover), inner dentelles, author and title to gilt spine, marbled pastedowns, a.e.g. A lovely set in a beautiful binding.

Peter Pindar was the pen name of John Wolcot (1738 – 1819), an English satirist, who found that poetry paid better than his medical profession. Although he was trained as a physician, in 1780, Wolcot went to London and began writing satires.

His first targets were the members of the Royal Academy. For the art historian, the most relevant parts are the Lyric and Farewell Odes to the Royal Academicians for the years 1782, 1783, 1785 and 1786 (pp. 9-133). Here, the painter Benjamin West and other leading members are unmercifully satirised.

His ‘Subjects for Painters’ (pp. 445-506) are well-repaying readings, particularly the ones ridiculing the naturalist Sir Joseph Banks, King George III, and the Abyssinian traveller James Bruce. Other objects of his attack were Boswell, the biographer of Samuel Johnson, Hannah More, former bluestocking and playwright, and Bishop Porteus.

Wolcot had a remarkable vein of humour and wit, which stung its subjects to the quick. He had likewise strong intelligence, and a power of coining effective phrases. In other kinds of composition, as in some ballads he wrote, an unexpected touch of gentleness and even tenderness appears. Among these are The Beggar Man and Lord Gregory. He died at his home in Latham Place, Somers Town, London, on 14 January 1819, and was buried in a vault in the churchyard of St Paul’s, Covent Garden.