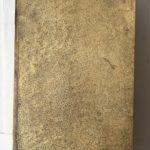 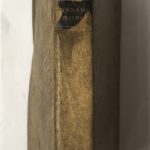 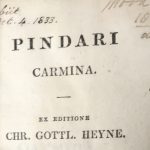 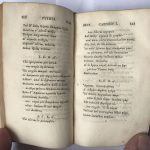 16mo, pp. (iv) 230 (ii) 138, two volumes in one. Predominantly Greek letter, some Roman. A small pocket sized edition of the works of Pindar with a short Latin commentar. It comprises the four books of Pindar’s victory odes, which are named after the Olympian, Pythian, Isthmian and Nemean games. Pindar was an Ancient Greek lyric poet from Thebes. He is one of the canonical nine lyric poets of ancient Greece. Pindar did not create any new lyrical genres, but worked with the pre-existing genres to a great success. In age-browned vellum over boards, remains of black morocco label to spine with gilt lettering. Defective vellum on the rear cover, slightly detached from upper corner. Maroon paper pastedowns. Ms. autograph on title page “Wood 1829” plus another annotation “obiit Oct. 4. 1833.” Internally, firmly bound and in good condition.