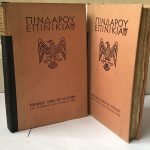 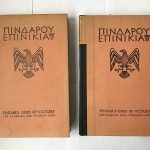 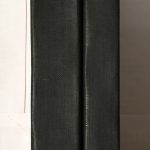 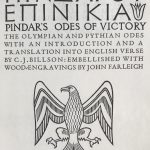 “There is nothing in the whole range of literature corresponding to the Greek odes of victory, the most splendid examples of which still surviving were composed by Pindar between the years 502 and 442 B.C., during the most flourishing period of the Greeks’ history, and in the high summer of their genius.” The Olympian Odes, introduction, v. “In these complex poems, Pindar commemorates the achievement of athletes and powerful rulers against the backdrop of divine favor, human failure, heroic legend, and the moral ideals of aristocratic Greek society. Readers have long savored them for their rich poetic language and imagery, moral maxims, and vivid portrayals of sacred myths” (Harvard University Press). The present copy was superbly printed at the Shakespeare Head Press of Stratford-upon-Avon on thick paper; an outstanding bilingual production on opposing pages, displaying Charles J. Billson’s delightful English translation. The fine woodcuts by John Farleigh are stylised illustrations in the Etruscan manner.