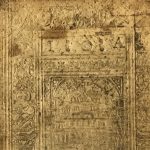 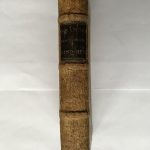 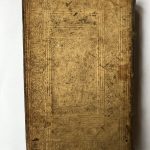 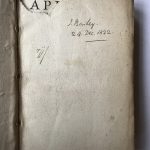 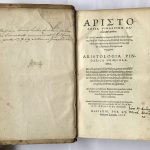 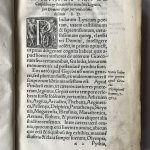 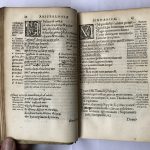 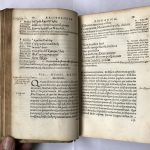 FIRST EDITION. 8vo, pp. [xxxii] 434 [iv], α-β8 a-z8 A-D8 E4. Greek, Roman, and italic letter. Decorated initials, original Greek text and Latin translation, and commentary on page margins. All annotated mainly by the same hand with scholarly care for emendation and erudite observations; extensive and continuous underlining throughout and frequent strikethrough erasing lines for correction purposes. T-p with early inscription; autograph of Cambridge classical scholar James Bailey, dated “24 Dec. 1822”, on recto of front endpaper (top of leaf towards hinge torn away), probably the author of most marginalia; ms. Latin note on verso with mention of Christian Gottlob Heyne’s appreciation of this commentary by Neander in the second part of his work dedicated to Pindar’s poems (p. 109, 1773). Ms. indexing on verso of rear flyleaf and note on rear pastedown: “collated perfect J. H. 1818”, plus another crossed out note with date “1816”. Margin edges slightly soiled and browned due to wearing and aging. The only flaw in the text block is at leaf a4, where a little square of paper has been cut off the central part of the margin with loss of few letters. In a remarkable yet very worn contemporary German alum-tawed pigskin over boards blind-tooled with decorative rolls, representing the personification of the seven virtues (initial F. H. readable in some sections), and central panel stamps. Front cover panel set between initials “I O A” and publication date, showing a trompe-l’oeil architectural landscape (Parnassus?) with Apollo playing the lyre at top; rear cover panel represents a scene with buildings, figures, an floral motives (image blurred and confused), and a psalm verse underneath: “voluntatem timentium se faciet” (Vulgate 144:19). Dark leather label on spine with gilt title and author. Worn spine caps and board corners. A very interesting copy in a sixteenth-century elaborate Protestant binding, overall in good condition.

This work is an anthology of Pindar’s best poems, a collection of the finest poetic texts of this Greek poet, which is provided with a Latin translation and commentary by the scholar Michael Neander (1529-1581), a Protestant polymath educated at Luther’ and Melanchthon’s University of Wittenberg. Neander included in is glosses several references to works on Pindar by other authors, such as the great humanist Desiderius Erasmus, who devoted plenty of room to Pindar’s sayings and aphorisms in his Adages (1500). In the introductory letter to his work, Neander states he made use of the precious studies on Pindar by Johannes Lonicer and Philipp Melanchthon. The work is dedicated to the German classical scholar Valentin Friedland of famous Protestant School of Goldberg in Silesia. He died in 1556, the same year this book was published. At the end of the book is included a selection of short texts and mottos by the Father of the Church and pagan authors.