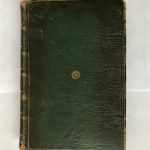 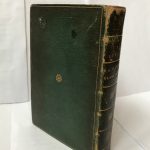 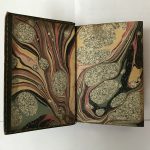 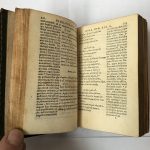 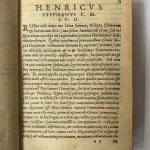 This is the third edition, by Plantin, of a work first published in 1560 by Henry Estienne. It includes Pindar’s poems – the Olympic, Pythian, Nemean and Isthmian odes – and other selected works of the Greek poets Alcaeus, Sappho, Stesichorus, Ibycus, Anacreon, Bacchylides, Simonides and Alcman. It also includes many other short poems concerning these poets by contemporary and later authors, both Greek and Latin. This is the result of a collaboration between the Mecenas of letters Ulrich Fugger and the printer Henry Estienne, who undertook an editorial plan to publish Ancient Greek texts. The first volume of this work includes a dedication letter from Estienne to the Protestant Reformer, scholar, and erudite Philipp Melanchthon, who worked on several classic authors, including Pindar, on whom he focused extensively. The second volume includes a poem in praise of Markus and Johann Fugger, which is likely to be a sign of recognition for the financial support that the Fugger, a rich family of bankers, provided for Estienne’s undertaking of printing Greek classics.