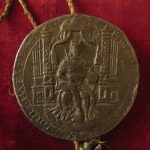 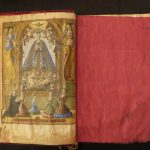 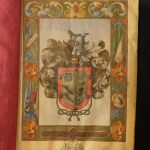 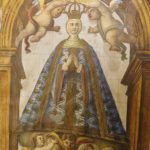 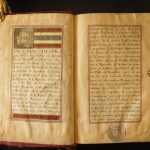 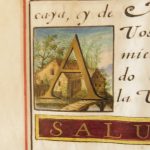 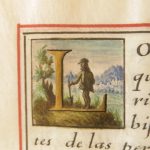 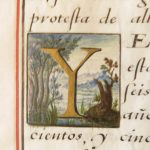 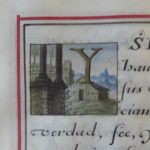 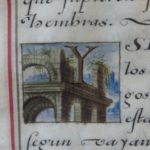 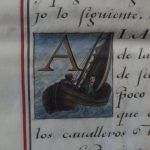 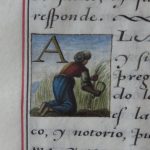 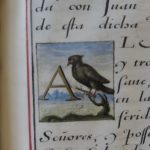 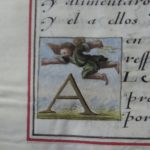 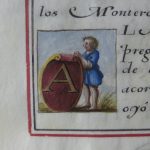 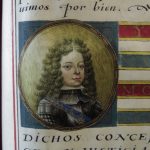 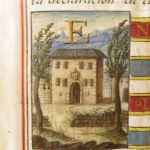 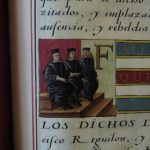 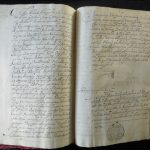 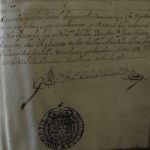 Manuscript on vellum, 4to. 30.3 x 19.5 cm, in Spanish, 200 leaves (including 20 final blanks), 23 or 24 lines per page, written in Italic with black ink, each page framed with red and black rules; the ink-stamped armorial seal of Philip V and a notary’s endorsement in the lower margin of each recto. 179 historiated initials, of four or five lines each, consisting of a gold capital superimposed on a scene with landscape, figures and architectures; 8 large historiated initials, each accompanied by three or four lines of text in gold capitals on alternating red or blue grounds. 58 additional single lines of gold capitals on red or blue grounds introducing sections of text. Two full-page illustrations at front, one of the Reguilon family praying before the Virgin (see description), the other the family’s armorial, with borders comprising the family motto (below), arms (at the sides), a small medallion flanked by flora (above). Original red velvet over wooden boards with a large lead seal of Philip V suspended from a double cord braided of crimson, green and yellow silk; crimson silk doubles and 5 original silk interleaves (the velvet slightly worn and stained, slight worming of spine and doubles, wanting centrepiece and corner-piece bosses). Gauffered edges, gilt.

Patent of Nobility issued by Philip V, King of Spain, in favour of Francisco Juan Gaitan Reguilon and Franciso Reguilon y Cuevas. A beautifully illustrated patent of nobility, with numerous scenic and decorated initials, the frontispiece depicts members of the family in the chapel kneeling and praying before an altarpiece in which there is an image of the Virgin being lifted up to the sky and crowned by angels. The Holy Ghost oversees the scene. The image of the Virgin recalls popular Spanish devotional icons.