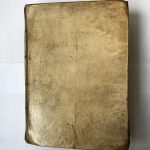 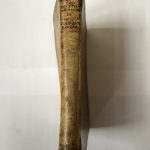 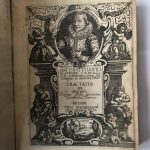 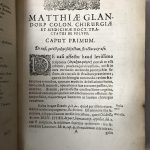 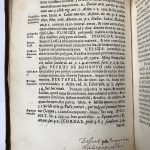 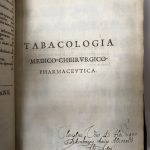 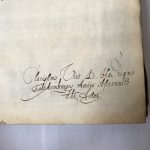 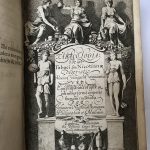 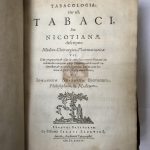 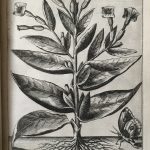 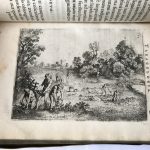 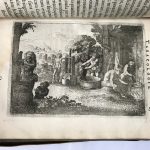 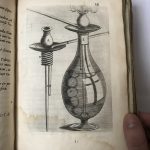 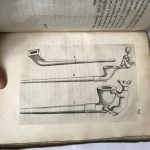 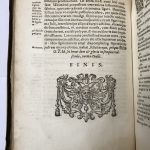 FIRST EDITION. 4to. Two volumes in one; acquired by the Bath Public Reference Library in 1926 (bookplate on front pastedown and unobtrusive blind letterpress on margin of some leaves). Ink ownership inscription of Scottish man Thomas Falconer on additional title of Neander’s work, and bookplate on verso of both titles (an Angel praying within a orle of laurel and motto: “vive ut vivas”). Bound in contemporary stiff vellum with yapp edges, ink lettering on spine, upper joint slightly cracked, but still resisting. Two first editions, one of which extremely important and rare for the history of tobacco use. Only one copy of this first edition is recorded at auction (ABPC).

1) [GLANDORP] pp. (viii) 60 (iv), (?)4 A-H4. Roman letter, some Italic, the sporadic word or sentence in black letter. Title within full-page engraving by artist Gerrit Muntinck of architectural border crowded with studious putti and topped by portrait of the author at 33 years of age with motto: “ut pia fata volunt” [Krivatsy 4747]. At foot, a vignette of an archer shooting arrows at close aim with motto “viciniori”. Woodcut initials, head- and tailpieces. Very light marginal browning throughout, some light soiling to margins of t-p. Wanting quire E, as also stated in an early Latin hand at foot margin of leaf D4v incriminating the lack of care of the bookbinder “desunt per incuriam bibliopegi, libri hujus praestantissimi paginae octo”.

2) [NEANDER] pp. (xlii) 256 (iv), (1) *-5*4 A-2L4 2K2. Roman letter, some Italic, a little Greek. AUTHOR’S PRESENTATION COPY, inscribed on half-title: “Clarissimo Viro D. Hadriano Falckemburgio Amico Observando ddt Autor”. First additional title-page fully engraved with portico; Apollo and Artemis to the sides; to the top, personification of a virtue (Temperance?) as a crowned goddess holding a vase in her right hand and a book on her lap, flanked by two other females figures preparing tobacco; at foot, a set of alchemical and medical-pharmaceutical items. Small Elzevir vignette on second t-p, known as Le Solitaire, recalling the Estienne device; motto “non solus”. Large woodcut initials, headpiece and 9 engraved plates, first three by the author, second three by Moses van Uytenbroeck, and last three by Michel Le Blon. Light dampstaining throughout lower gutter. Outer blank margin of third plate (B3) with clean tear along the illustration, no affection of the image, because of the thinness of the paper. Overall a clean, crisp, and ultimately a fine copy.

The second book included in this volume is the first edition of a famous early work, completely devoted to the subject of tobacco, written by the German Physician Johann Neander (1571-1639) from Bremen. The first work is a treatise on nasal polyps by the physician Matthias Ludwig Glandorp (1595-1636), unfortunately incomplete. Neander’s work is a compendium of information concerning all aspects of tobacco and its production. The Tabacologia describes the many uses of the plant and its medical properties, providing recipes for its best employment. It includes finely executed botanical and bucolic engravings illustrating the plant and the harvesting and processing of tobacco in order to make it ready for use. The three final engravings show typologies of smoking pipes and smoking-related accessories.

This is an important presentation copy from the author to Adrian Falkenburg (d. 1650), one of his colleagues at the University of Leiden, whose contribution to the study of the effects of tobacco on the human body is printed in the form of a letter to Neander at the end of the present book. In his long letter (pp. 228-240) Falkenburg illustrates the noxiousness of tobacco. He states that, after inhaling tobacco smoke, the particles produced by its combustion are absorbed by the blood and carried through the body, accumulating in the brain. The Spanish physician Nicolas Monardes (1512-88) first wrote about the medicinal use of tobacco. He described over sixty-five diseases, which he claimed it could cure. His treatise was so influential that it led to the idea that tobacco could cure all diseases and conditions. He started a controversy which was to be debated for the following two centuries as the medical world was split over the benefits or harmful effects of the tobacco plant. The English herbalists John Gerard claimed that tobacco could cure conditions such as migraine, toothache, gout, ulcers, asthma, and deafness. He did advise, however, that although smoking the dried leaves in a pipe may “palliate or ease for a time”, it would “never perform any cure absolutely”. The work “Panacea, or Virtues of Tobacco” of the Dutch Giles Everard was first published in Latin in 1587. He added to Monardes’s list of diseases to such an extent that tobacco came to be regarded by many as the great universal medicine. Everard even implied that it was such a cure-all that there would be less need for physicians. Eleazar Duncon was one of the first physicians to write about the harmful effects of smoking tobacco. He delivered a special warning that it was “so hurtfull and dangerous to youth” that it might just as well be known “by the name of youths-bane, as by the name of tabacco.” The tobacco controversy became so heated that even the King became involved. James I denied that “this vile custome” had any medical value whatsoever. By using logic, and the medical knowledge of his time, King James challenged many of the claims that were being made. The King concluded with the view that it was “a custome lothesome to the eye, hateful to the nose, harmfulle to the braine, dangerous to the lungs”.

In the present work, Neander recommended the medical use of tobacco in recipes and warned against its recreational abuse. It was, he said, “a plant of God’s own making, but the devil likewise involved; excesses ruined both mind and body.” Neander “treats tobacco as a medicine, especially against the plague. Of pharmaceutical chemical interest are the prescriptions containing tobacco for treating a wide variety of diseases. Three of the fine plates are etchings by the famous Dutch painter Moses van Uytenbroeck, showing Indians preparing tobacco, and these are the earliest illustrations of the American tobacco trade…The last two leaves contain a poem in Dutch, by Joost van Ravelingen, praising tobacco. Its popularity as a stimulant spread rapidly during the early seventeenth century, and on page 47 is an account of the postmortem of a young man whose death is attributed to his addiction to smoking, having had no previous illness.”–Neville, II, p. 216. “The little that is new in this treatise is of very definite value in the history of tobacco, and that little is rendered more impressive by the novel and accurate illustrations which decorate the work. Among them are the earliest representations known to us of American natives engaged in cultivating and curing tobacco, of curious pipes, and of the kalian of Persia. ” (Arents)