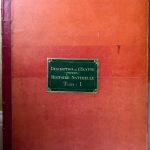 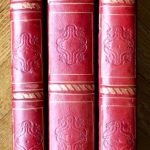 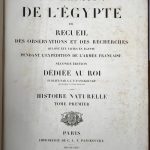 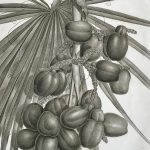 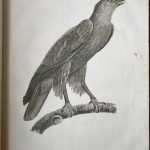 This Natural History in three parts belongs to the second edition of the description of Egypt, which was printed by Charles-Louis-Fleury Panckoucke in 24 in-8vo volumes, divided in 26 books, plus 10 volumes (no. 27-37) including beautiful plates illustrating the Egyptian Antiquités, in 4 tomes, État Moderne, in 2 vols, the Histoire Naturelle, in 3 vols, and the Atlas Géographique, in 1 vol.. The first edition was printed between 1809 and 1822 at the Imprimerie Royale and it was the first scientific description of Ancient and Modern Egypt. This monumental enterprise represented a milestone in the history of French governmental printing. It was coordinated by the Institut d’Égypte, established by Bonparte at Cairo and chaired by Gaspard Monge. Fourier, who wrote the introduction, in 1798 was instructed to gather the reports concerning the multiple disciplines involved. The work was the result of the collaboration of many scientists, artists and technicians who voluntarily followed Bonaparte in this incredible adventure. After the capitulation of the army under General Menou, the scientists, artists and scholars returned to France. For fear of seeing scientists publish their work individually, the government quickly created an eight-member Egyptian Commission to carry out this “great work”. The publication began in 1810; Napoleon wanted it to begin in 1809 to celebrate his first decade in power, and hence the title pages of the first volumes were backdated. The work was completed only in 1830, when the maps of Sinai, Egypt, and Palestine were finally taken out of the Dépôt de la Guerre, which, for security reasons, had so far kept under seal. Famous naturalists and illustrators contributed, such as Jacques Barraband, Pierre-Joseph Redouté, Geoffroy Saint-Hilaire and Jules-César Savigny. The quantity and accuracy of the information provided surpassed any work published before the expedition. The monuments were measured and described with remarkable precision. Even inscriptions whose mystery had not yet been understood were reproduced with great fidelity.