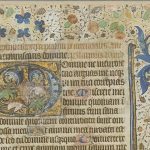 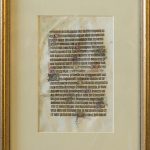 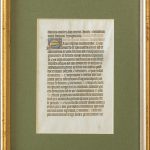 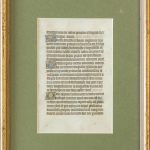 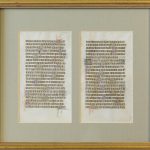 [BOOK OF HOURS], Leaves from a Book of Hours in Latin, illuminated manuscript on parchment.

Six single leaves (ca. 18×13 cm; 26×21 cm framed and glazed), plus one double leaf framed separately (31×24 cm), with 22 lines in a fine gothic bookhand with readings from the monastic offices for the various liturgical hours of the day. Five leaves (including the double leaf) with small initials in blue or liquid gold with contrasting red or black penwork; 3 leaves with larger initials in colour on gold grounds enclosing vividly coloured foliate sprays, the text enclosed within with gold and coloured text bars, border decoration of coloured swirls of acanthus leaves and single hairline foliage terminating in a wealth of painted flowers and golden leaves.

These are leaves from perhaps the most fundamental and popular type of book produced during the Middle Ages: the Book of Hours. During the fourteenth century, the explosion of wealth and piety pushed the affluent secular classes to adopt the monastic liturgical hours – certain hours of the day which began with recitations of prayers and parts of the liturgy predominantly in Latin – and ever increasingly opulent copies of these texts were produced for secular patrons to keep with them at all times and to use when the local church or monastery chimed the correct hour. By the time of the production of this copy gold was frequently used to catch the light as the reader turned the book in his hands and heighten the visual impact of the page.