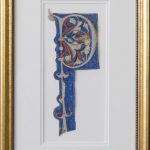 MINIATURE. Decorated Initial ‘P’ on a cutting from an illuminated choir book on parchment.

Ca. 25 x 10 cm (framed and glazed 43 x 28 cm). Long, tall and thin decorated initial “P” enclosing an exquisite penwork human face, (perhaps an oblate of a monastic community or a choirboy), on a cutting from a decorated choir book on vellum. The shape of the initial and the use of a hot-red colour might also suggest Siena (cf. the Gradual leaf now in the Getty Museum: T. Kren and K. Barstowe, Italian Illuminated Manuscripts in the J. Paul Getty Museum, 2005, illustrated on p. 9), but the curling foliage here also shows a strong affinity with the work of Bologna in the same period (see ibid. pp. 10-11). While Italian cuttings are common on the market, those as early as the fourteenth century are rare, and those of the thirteenth century exceedingly so, and are keenly sought after by the market.

Single long cutting, trimmed to edges of initial, the initial in fawn bands edged with scalloping acanthus leaves, red baubels set with body of initial and mirrored sprays of red acanthus leaves emerging from descender, all enclosing riotous sprays of angular acanthus leaf foliage in fawn, dark blue and hot red, the interstitial space in right-hand of compartment with a detailed human face picked out in penwork on fawn grounds (a youth with thin features dressed in white robes, and thus perhaps one of the original singers from the parent volume: either an oblate of a monastic community or a choirboy), the whole on wide dark blue grounds with scrolling white penwork often forming double parallel lines), some damage to foot and traces of having once had descender folded over on itself, else in good condition.

A fine and remarkably early example of Italian medieval illumination, with elements of its decoration (the style of the white penwork, and hot red palette, among others) suggesting that the artist was the Master of Bagnacavallo (active late thirteenth century). He is otherwise known from a series of cuttings taken from the choir books of Imola Cathedral (New York, Metropolitan Museum, 26.159.1 & 26.159.2, and probably also that sold from F.G. Zeileis collection by Koller, Zurich, 18 September 2015, lot 101), and this may be a missing cutting from that group.

Provenance: From the collection of Roy Davids (1943-2017), former head of the Book Department at Sotheby’s.