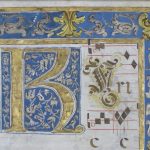 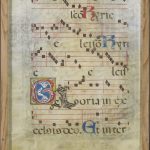 MINIATURE. Illuminated antiphonal leaf, from a vast manuscript in Latin, on parchment.

Single vast leaf, 550 mm by 395 mm., with 4 lines of text in an elaborate calligraphic hand with music in diamond-shaped notes on a 4-line red stave, a single calligraphic initial touched in yellow wash, other initials in colours enclosing sprays of foliage, one very large initial ‘K’ in highly burnished gold on deep blue grounds enclosing realistic sprigs of flowers with a full ‘frame’ decorated border in same with thick gold bands on innermost and outermost edges and gold acanthus-leaf sprays at corners and midpoints of frame, direction of relevant reading for 5 October: “S. Placidi” in main hand at foot of page. Excellent condition.

This is a visually striking example of late illumination in an excellent state of preservation. Parallels for the style of the sumptuous decoration here can be found as far back as the early sixteenth century (cf. R. Watson, Victoria and Albert Museum. Western Illuminated Manuscripts, II, 2011, no. 142, dated c. 1510-1520, especially illustration on p. 758; and no. 157, dated 1500-1515), other features here such as the form of the smaller red initial (cf. ibid, no. 173, dated 1565-1575) suggest a date late in that century.