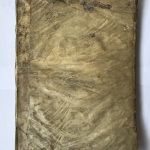 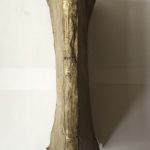 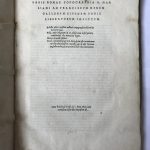 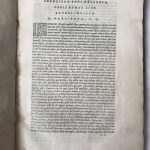 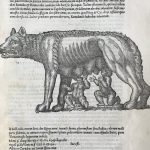 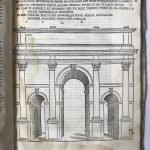 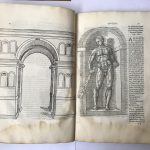 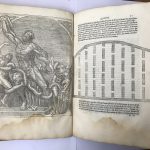 FIRST ILLUSTRATED EDITION. Folio, ff. 6, pp. 122 [2], A6, A-B4, C-L6. Italic letter, some Roman and Greek. First issue including the text of the privilege from Pope Paul III. T-p without ornamentation, woodcut initials. 23 fine woodcut illustrations, including a folding double-page engraved map of Rome by Giovanni Battista Palatino (see, Frutaz 12). Very large woodcut printer’s device (Pegasus) on recto of final leaf with register and imprint date. Small hole due to the moulding of a little area of the upper margins of the first three initial leaves. Extensive waterstaining affecting the book throughout, along gutters and foot margins. Light soiling, or spotting, and thumb marking to margins of some pages. Folding plate with the plan of Rome worn, with turn-ins partially detaching. In contemporary limp vellum, missing ties, cover edges slightly ragged. A good well-margined copy on thick paper, despite the waterstains.

The first illustrated edition of this important guide to Rome, dedicated to Francis I. The text, first published in 1534 by Antonio Blado with a dedication by Rabelais, was substantially amended and enriched with woodcut plans, views, and sculptures for the present edition. Born to a noble Milanese family, Bartolomeo Marliani dedicated his life to the study of Roman archaeology. This work was the pre-eminent account of the antiquities of classical Rome of his day, many of which were to suffer subsequent alteration or disappearance. This edition is one of the masterpieces of Renaissance classical architecture and has remained justly sought after throughout four and a half centuries. The enduring importance of the work is that it tells us what the city was like before many of its ancient ruins were altered, incorporated or swept away in the great building activities of the late 16th and early 17th centuries.

Marliani’s approach to the archeology of Rome differs considerably from that of his predecessors, especially Giacomo Mazzocchi, in that he gives far more prominence to architectural and sculptural detail than to inscriptions, which had almost solely occupied earlier archaeologists. Illustrations include a map of Rome, the mythological founders of the city Romulus, and his brother Remus with the she-Wolf, the Laocoon, the Circus Maximus, the Celsus’ Pyramid, the Pantheon, and the Obelisk. The depiction of the statue of Laocoon is one of the earliest ever produced. In fact, Marliani was present in Rome to the unveiling of the statue in 1520.