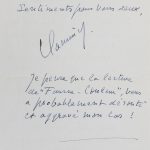 Autograph letter signed, octavo, two pages, dated 29 March 1957, from Vlaminck to Marcelo Anchorena, thanking him and his wife Hortensia for lending the memoirs of the Duchess of Windsor. With its original envelope, postmarked 30 March 1957 and addressed to an apartment in Paris with the return address, all in his own hand.

Marcelo Anchorena was an important Argentinian land-owner with a passion for French painting. Since from the early 1940s, he and his wife Hortensia started to invite the greatest artists in Paris at their residence in Avenue Foch, in order to commit to them decorative works of art for their house. Despite the rationing, their house was one of the few that were refurbished of “marvellous wines, cigars and great food” (Richardson, J; Vogel, C.). They soon secured the works of Picasso, Jean Cocteau and Matisse, with whom they had a long and unnerving correspondence for a painted door in the waiting room.

It is not clear when Anchorena and de Vlaminck first met. However, their friendship went on for some years. Other letters between the two reveal that de Vlaminck went on visiting the Anchorenas and that books about art were regularly discussed and exchanged. In this letter, the painter thanks his friend for his hospitality and mention a book about ‘fausse-coleur’.