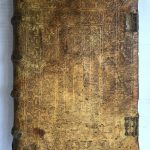 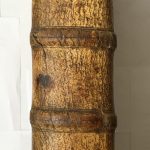 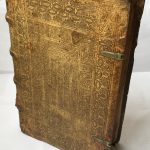 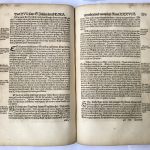 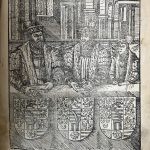 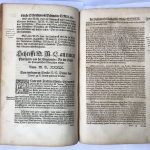 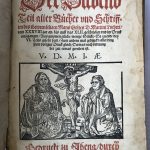 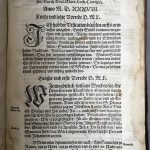 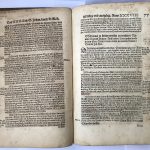 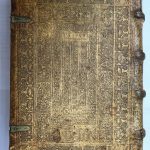 Folio. Gothic letter, a little Roman. Historiated initials and capital spaces with elaborated guide-letters, title in red and black with large vignette of Christ on the cross with John Frederick I, Elector of Saxony, and Luther kneeling; full-page illustration on recto of second leaf with the portraits of the dedicatees, i.e. the Protestant Saxon princes Johann Frederick II, Johann Wilhelm and Johann Frederick III, and their coats of arms. Lightly age browned; some dampstained blank margins. Copiously and clearly annotated in an early Latin and Greek handwriting with numerous references to the difference between Luther’s view and the doctrine of the “papists” and other Reformers. In contemporary German alum-tawed pigskin, elaborately blind-tooled with various rolls of palms, Biblical figures and verses. Remains of clasps and catches; minor rubbing, four raised bands to spine, worn at caps and joints.

A finely bound copy of the seventh volume of the Wittemberg and Jena editions of the works of Martin Luther (1483-1546) in German. Through his prolific activity as a religious writer and polemicist, the initiator of the Reformation was also one of the fathers of modern German. Sponsored by the Elector of Saxony, the first comprehensive collection in twelve volumes was made in Wittenberg by Melanchthon and with the contribution of other Reformed scholars. This volume is made even more interesting by the marginalia in a very easily readable hand, which compared Luther’s texts with those of other theologians of the time, such as Urbanus Regius and Tileman Heshusius. However, the compiler traces parallels with ancient sources as well, thus giving us a valuable insight into the disputations and spiritual controversies of the Reformation. Many are the references to the “papist abominations and blasphemies” such as the sale of indulgences, easy excommunications and the avarice of priests, all of which are interpreted as the work of Satan in the world. Besides the theological controversies, there are several mentions of the Catholic prince Henry V of Brunswick-Wolfenbüttel as well. The prince long raged war against the Protestant Elector of Saxony and here his impunity and ambiguous position towards Protestantism is noted. Luther’s criticisms to the Roman Church are underlined and pointed out on the margins. Christ is defined as “humanissimus salvator”. There is also reference to Luther’s parrhesia as opposed to the deceptive discourses of the Catholics.