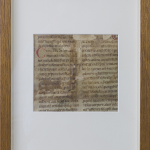 Substantial cutting from a very large Romanesque manuscript, 21,5 cm. by 21,5 cm., with remains of two columns with 18 lines remaining in a fine and rounded late Carolingian bookhand, small initials, chapter numbers and rubrics in red, one large initial “B” in red penwork “bolted” together at its extremities by drawings of bands containing small circles, infill of early white-vine decoration on pale wash green and blue grounds, recovered from reuse in a fifteenth- or sixteenth-century bookbinding and so with folds, small stains and a hole (now professionally repaired). Framed and glazed (46 x 36 cm). This is an appealing early leaf of a date which is hard to now find on the market. The use of soft colour washes echoes that of the initials and line-drawn miniatures of a complete twelfth-century German Legendary, sold by Sotheby’s, 2 July 2013, lot 49, for £450,000 hammer, but it is perhaps closest in its ‘bolted’ banding of the body of its initial to a white-vine initial on a leaf offered by Sotheby’s, 3 December 2008, lot 5 (there identified as Austrian and twelfth century; and now in a 22 European private collection) as well as other contemporary Austrian examples (see F. Avril & C. Rabel, Manuscrits enluminés d’origine germanique, 1995, no. 122, pl. cxv).

The parent book of this striking fragment would have been central to the life of the monastery or community it belonged to in the Early Middle Ages – containing the lives of the saints most sacred to the community. This part contains that of St. Leonard of Noblac, who was a Frankish noble (perhaps a royal) during the reign of the Merovingian king, Clovis I (the founder of the Merovingian dynasty, and the “clodouei regis” three lines below the initial here). He converted to Christianity alongside Clovis in 496, and after declining a bishopric, he became a hermit in the forest of Limousin, and after his prayers granted the queen of the Franks a male child was granted lands at Noblac, outside Limoges, where he founded the abbey of Noblac for himself and his followers. He fell ill while travelling and died in 559, and his feast day is 6 November. There is a Swiss town with his name, Saint-Léonard is in the canton of Valais, which is dedicated to him, and it is possible that this fragment comes from a church or monastery there.