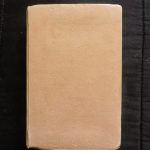 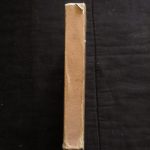 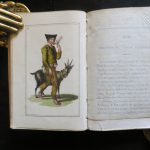 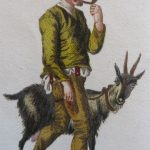 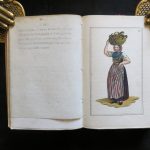 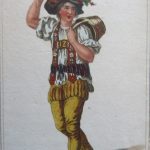 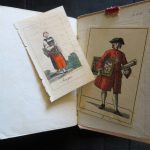 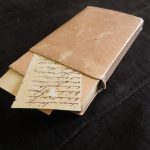 In 24.o (12 x 8 cm) . (10), 91, (1) pp. 40 hand-coloured plates protected by tissue paper. Half-title and title page. Bound with coated pink paper over thick cardboards, included in its original slipcase. All edges gilt. Inner joints a little cracked but generally sound. Remains of a fabric bookmark. Illustrations are perfectly preserved with fresh colours and very clean; very light foxing only on some of the text. This copy includes two additional cut-out figurines from different series, as ephemera: one portraying an art dealer (?); and another portraying the costume of Aargau and some handwritten notes by a C19th hand.

This is the second French edition of König’s small survey on his country’s costumes and people. Including 40 brightly coloured plates, this catalogue of costumes became very popular in Switzerland and among tourists. Well in the tradition of this kind of publications, the visual description of costumes is followed by a short text giving more details on the dresses themselves and on the activities these were used for. The idea that the form of the dress will have to serve a precise function is well eradicated in modern fashion literature. All characters are peasants and that their simple life-style is profusely exalted by the anonymous writer, possibly König himself.

Franz Niklaus König (1765 – 1832) was a painter and printer from Bern. After his apprenticeship with Anton Dunker, he opened his own workshop in 1786 and started producing landscapes and rural scenes. However, his popularity was due to his illustrations of costumes that he published in great quantity. He was also known for his ‘diaphanies’, scenes painted on glass, which he projected through the lights of candles.