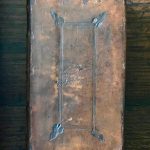 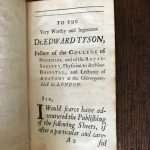 KEILL, James. The Anatomy of the Human Body Abridged: Or, a Short and Full View of All the Parts of the Body. Together with Their Several Uses, Drawn From Their Compositions and Structures.

“James Keill (1673-1719), author of the most popular English anatomical compendium of the close of the seventeenth and early part of the eighteenth centuries, also enjoyed renown in the latter century as one of Britain’s leading iatromathematical physiologists […] Keill felt himself sufficiently prepared to lecture on anatomy as early as 1698 for in that year he published the first edition of his popular ‘Anatomy of the Humane Body abridged’. The book is dedicated to Edward Tyson (1650-1708), lecturer in anatomy at Chirurgeons’ Hall and England’s leading comparative anatomist whose encouragement Keill credits with having led him to publish the work and whose ‘private Favours and Civilities’ Keill acknowledges. The dedication was retained in later editions but Tyson appears not to have figured further in Keill’s career. As a small, concise compendium, Keill’s ‘Anatomy’ filled a definite gap in English anatomical works of that time but it was hardly an original effort. Keill himself made no secret of the fact that his “small Pocket-Book”, as he described it, was based upon the anatomical epitome of ‘M. Bourdon … who has expressed some things especially in his first Chapter, so briefly, and yet altogether so fully, as that I thought I could not do better than to Copy after them.’ However, some sections of Keill’s Anatomy, such as that on the brain, diverge considerably more from Bourdon than the earlier pages. It is thus incorrect to call it simply a copy of the French work, for although it appears that Keill had a copy of Bourdon’s work in front of him when he wrote his own, he had no hesitation in adding sentences or paragraphs to Bourdon’s text, deleting items such as clinical references, and otherwise rearranging material as he saw fit.” (from Valadez, F. and O’Malley, C. D. ‘James Keill of Northampton, Physician, Anatomist and Phisiologist’)