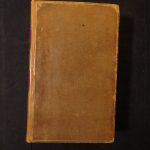 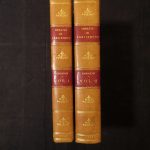 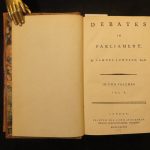 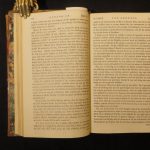 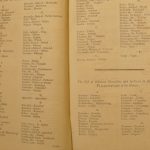 FIRST EDITION. 2 volumes, 8.vo. With title-page and table of contents. Bound in a C19th leather binding, re-backed with a more recent spine in seven compartments divided by double-filets; gilt lettering to spine and boards’ edges. Perfectly clean throughout with very light tanning due to age and no foxing at all, a few occasional thumbmarks. A fine copy.

Appearing on ‘The Gentleman’s Magazine’ from 1732 as the proceedings of the House of Commons, these debates were originally written by historian William Guthrie (1708 – 1770) and revised by Johnson, who was appointed to this by the magazine’s chief editor Edward Cave (1691 – 1754). After the House of Commons passed a resolution against the publication of their proceedings, there became necessary providing a fictitious frame to the real debates by changing the names of people and places without changing the general sense of the debate itself. Through this stratagem, the column changed its name in ‘Debates in the Senate of Magna Lilliputia’ and allegedly reported on the voyage of Gulliver’s grandson. It is not certain who first came up with the idea of borrowing Swift’s narrative to circumvent the law. In fact, the articles started to be written by Johnson alone from November 1740 to February 1743.

The speeches, allegedly recorded by Johnson, were in fact almost entirely invented by him as he could only have access to some sketchy notes by employees of the House of Parliament and the order of the speakers with an indication of their vote: these were written ‘from no material at all – the mere coinage of his own imagination’ (Boswell, p. 150). Therefore, these fictitious speeches have no historical value. However, they certainly throw light on the utter ease, with which Johnson could speak authoritatively of almost every topic. It was when Johnson found out that these articles were translated and diffused abroad as authentic, that he stopped this commitment with the Gentleman’s Magazine.

The ‘Debates’ were issued both as an addition to Hawkins’ second edition of his ‘Works of Samuel Johnson LL. D.’; and as two separate volumes, as it is the case of our copy. The editor of this work (George Chalmers, according to Boswell; or Hawkins himself), attributed the idea of ‘Magna Lilliputia’ to Edward Cave and decided to restore the correct names of people and place whilst providing us with a useful table to decrypt the anagrams hiding the parliamentary identities. Although this would not give any further credibility to the text, it would show Johnson’s political intelligence in perfect detail.

BOSWELL, James. An Account of Corsica. The Journal of the Tour of that Island and Memoirs by Pascal Paoli. By…

[envira-gallery id="9777"] BOSWELL, James. The Journal to a Tour of the Hebrides with Samuel Johnson LL. D. London, Henry Baldwin,…