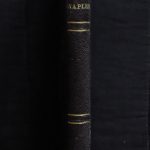 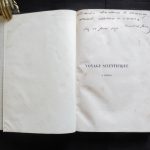 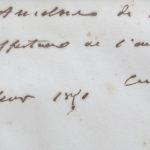 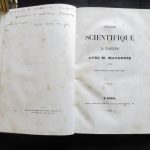 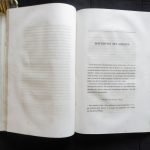 FIRST EDITION. 8vo. (4), 103 pp. With half-title and title page. T-p with autographed dedication by the author. Bound in morocco-backed boards of black-coated paper. Some light foxing and yellowing throughout but a very good presentation copy.

This is the scarce report of a visit to the gulf of Naples by French scientists Constantin James and François Magendie. The latter is known for his many contributions to physiology, especially regarding the properties of the nervous system. Together with his pupil Claude Bernard, Magendie is considered a pioneer of experimental medicine, as he always reported his discoveries to precise experiments. However, he was later criticised for his cruel methods and particularly for his extensive use of vivisection.

At the time Constantin James went with Magendie to Naples, he was a young apprentice in physiology. Previously, he had been in charge of collecting his master’s lessons at the Collège de France in order to make them available for publication. It is probably around these years that this book was written. James later became an important chemist and mineralogist. In this short essay, he describes some of the chemical oddities in the Bay of Naples and the experiments that he and Magendie carried onto some of these. Although he was a partisan of experimental science, he famously opposed Darwinism in a polemical essay that confuted Darwin’s anti-traditional approach to natural sciences.

There are only nine copies of this book recorded in public libraries worldwide.

[envira-gallery id="10913"] BRITISH AND FOREIGN BIBLE SOCIETY (ed.), The Book of Psalms Embossed for the Blind in Braille Type. London,…