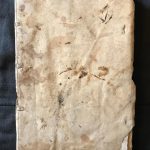 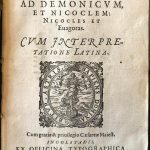 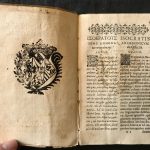 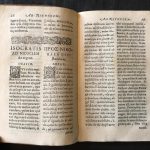 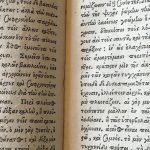 8vo, pp. (ii) 133, A-H8 I4. Italic Greek type and Roman letter. Small t-p vignette of crowned goddess within a roundel, standing on a globe and holding a sceptre in one hand and a brazier in the other. Blank t-p verso with stamped large coat of arms resembling the one of Maximilian III (1558-1618), Archduke of Austria. This must be a later addition since other copies of the same editions are lacking it. Double column, decorated initials, head- and tailpieces. Early ms. note of provenance on top of t-p: “Collegii Societatis JESU Oenipontis [Innsbruck] 19 December 97”. In contemporary vellum wrappers, remains of ties, ink title to spine, charmingly worn and stained, hole to spine, a.e.b.; an excellent copy.

Isocrates (436 – 338 BCE) was an Athenian orator, whose writings are an important historical source for the study of the intellectual and political life of Athens of his day. Notably, the school he founded differed markedly in its aims from the Academy of Plato.

“Isocrates’ concern with the moral basis for power also appears in the three other so-called Cyprian orations, which should be read in conjunction with the Evagoras. In the To Demonicus, assuming that it is genuine, Isocrates advises his addressee through a series of traditional maxims, familiar from Hesiod, Solon, and Theognis, somewhat loosely strung together. Not surprisingly, piety, justice, moderation, and self-control figure prominently. In this work, Isocrates gives advice to Demonicus both as a private citizen, telling him to emulate the character of kings and as a future ruler, instructing him to govern fairly and justly. In the To Nicocles, which is also full of traditional gnomic maxims, likewise somewhat loosely organised, Isocrates addresses himself more specifically to the moral virtues necessary for the ideal ruler […] Throughout, Isocrates advises that a successful ruler must be a moral ruler. In the third Cyprian oration, speaking through the voice of Nicocles himself, Isocrates gives the flip slide to the moral virtues necessary to the ideal by showing how the behaviour of the subjects in the ideal state ought to correspond in moral virtue to that of the leader”. Frances Pownall, “The Moral Education of the Elite”, in “The Politics of Orality” (2007), p. 239.

Bibliography: Not in BM.