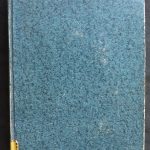 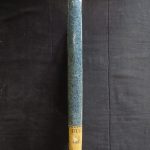 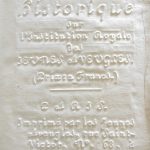 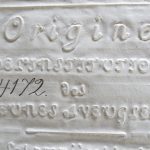 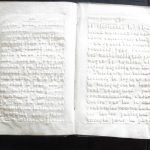 FIRST EDITION. 8.vo. 32 pages, including title-page. Printed with embossed Italianate type on thick paper doubled by glueing two leaves together. Handwritten note ‘4172’ on p. 5.  A clean copy with only some browning to the last page and some (inevitable) soiling due to thumb marks. Original hardback covers with blue marbled paper over boards. Label to foot of spine with shelf number inscribed therein. Some wear at top front right corner and to lower edge, but overall in excellent conditions.

The Royal Institute of Blind Youth of Paris was the first institute in the world to be specifically founded with the intention of providing the blind with equal access to education and a real possibility of developing their working skills. It was founded in 1785 by Valentin Haüy (1745 – 1822), a court interpreter and linguist. After witnessing the humiliation of a group of blind people by the crowd during a city festival, he was determined to give them an opportunity to improve their lives. He then met the young beggar François Lesueur, who became his first student. In order to teach Lesueur to read and write, Haüy invented the system of embossed letters, which was used in this copy. This system was based on the idea of substituting sight with touch through the creation of a special font and printing technique, which would enable him to print on both sides of the page, whilst keeping the necessary relief for tactile recognition. The results of his techniques were so brilliant that he received the official endorsement of the Royal family and the financial support of the Philanthropic Society to open the Institute. Besides teaching them to read and write, the Institute aimed to offer its students training on manual works such as spinning and letterpress. A special place was occupied by the teaching of music, in which many of the former students later excelled. The present publication explains in details the pedagogical aim of the Institute and the different classes that the students were required to take. This exemplar might have been used in one of the public demonstrations that the Institute routinely organised to promote its activity.

After the Revolution, the Institute returned to be a royal institution and was therefore housed into the former seminar of Saint-Firmin. Haüy, who was politically involved in the Revolution and had to flee because of his status of ‘terrorist’, returned to Paris in the same year this book was published. Only two years later, in 1819, a young boy who lost his sight for an accident at the age of four started to attend Haüy’s school. He was Louis Braille (1809 – 1852), the inventor of the Braille alphabet, a much easier reading system in continuous use until today.

This ‘Notice Historique’ is the earliest publication of this kind to survive and is the first book to be printed especially for the use of the blind. There are only six copies of this first issue in public libraries worldwide and no other known copy is currently available on the private market. This copy pre-dates an 1819 edition of this same work – with the indication of the infamous Director Sebastien Guillé as the author of the text on the title-page -, which has been sold at auction in 2006 as a first edition.

[envira-gallery id="10913"] BRITISH AND FOREIGN BIBLE SOCIETY (ed.), The Book of Psalms Embossed for the Blind in Braille Type. London,…

[envira-gallery id="9597"] CATLIN, George. Illustrations of the Manners, Customs and Conditions of the North American Indians with letters and notes…