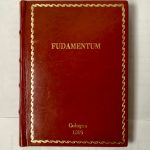 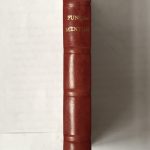 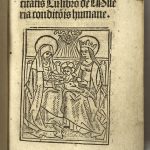 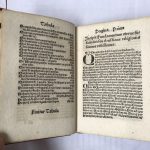 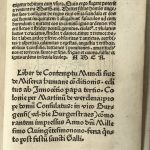 8vo, 60 unnumbered leaves, A-F8 G4 H8. Black letter, 32 lines. Large woodcut vignette on title page repeated on verso of last: Jesus as a child between Saint Anne and Mary in the presence of the dove of the Holy Spirit. Capital spaces with small guide-letters, printed maniculae indicating the heading of each paragraph. Small paper repair to outer margin of t-p and metal clip to margin of D6 bookmarking the table of contents. Evenly soiled, yet lightly, and a little darkened to margin edges. In modern gilt red morocco, title and date on front cover and spine. An excellent copy.

Pope Innocent III, alias Lotario di Segni (1160-1216), was born near Rome and completed his studies in Paris and Bologna. This man of austere manners became cardinal in 1190 and was proclaimed pope at Celestine III’s death. As the leader of the Church, he fostered a moral reform of the clergy, the fight against heresy, and the re-conquest of the Holy Land. As such, he promoted the fourth crusade, which concluded with the sack of Constantinople in 1204. At the same time, he also undertook the Albigensian crusade in order to suppress the Cathar heresy, which had spread to large areas of the Pyrenees, Southern France and Northern Italy. He further crowned the Holy Roman Emperor Frederick II in 1212.

In his work of reformation of the Roman Church, he was moved by deeply religious convictions. Innocent wrote several theological and ascetic treatises, of which ‘De Miseria Humane Conditionis’ (also known as ‘De Contemptu Mundi’) was the most renown. In his essay, Innocent resumed the theocratic ideas of Gregory VII, according to which the pope’s authority over secular institutions is absolute. The ultimate responsibility of salvation belongs to the pope, thus enabling him to have the last say on spiritual as well as secular matters.

The editor of the present work was Hermann von dem Busche (1468-1534), a German humanist who studied in Heidelberg, Tubingen and Italy. He is given as being one of the authors of the ‘Epistolae Obscurorum Virorum’. He was a close friend to Ulrich von Hutten and an early enthusiast of the Reformation.