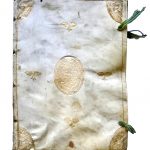 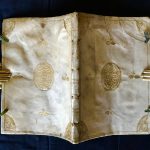 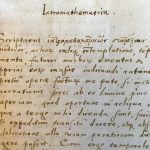 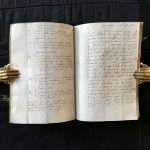 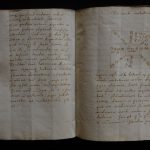 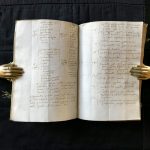 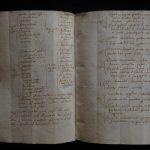 To our knowledge the most complete example of a rare treatise on astrological medicine, written in a clear secretarial hand and in an English Renaissance collector’s binding. Although the title is the same as an ancient text by pseudo-Hermes Trismegistus, this is a different work. The Hermes’ text, originally in Greek, was published in two separate sixteenth-century Latin translations, each printed several times: the present book is not a copy of either. Even though it does borrow content from its prototype, this is not a new translation of it.

Iatromathematics is defined in the introduction as “the means of revealing the properties, future instances and particular causes of sickness through contemplation of the stars and sky”. The author gives a warning from Lucretius concerning making calculations on bad scientific principles. He then goes on explaining “What to look for in the heavens the illness might be” (the text here followed by tables, referring both to body-parts and afflictions, and signs of the zodiac); “What part of the body might be infirm”; “whether or not the affliction will last”; “Whether or not [the person] will recover”; “Changes in illness, when or why they may happen, and whether they indicate good or bad things”. A study, with three horoscopes, is given of a man who was confined to his bed at 2 p.m. on June 5 1557 and died at 11 p.m. on June 14. Answers to the questions listed above are given for his case.

This book comes from the library of Lord Delamere of Vale Royal Abbey, Cheshire. The Cholmondeley family inhabited 11 Vale Royal from 1615 to 1948 but this book was possibly made for a member of a different family on account of the gilt acorns to the covers. Sixteenth- to seventeenth-century English manuscript culture is increasingly recognised for its liveliness, and the present volume illustrates its quality. We have found one other variant example of this text – not including the introduction or the horoscopes – amongst the Sloane MSS. of the British Library (Sloane MS 1770 fols. 120–130), which are recognised for their importance in medical history. This other example is written in a less clearly legible working hand from the same period as our manuscript.

We are very grateful to Dr Sophie Page of UCL for invaluable advice and bibliography.

[envira-gallery id="10102"] PATENT OF NOBILITY. Patent of Nobility issued by Philip V, King of Spain, in favour of Francisco Juan…