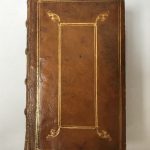 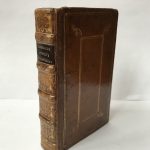 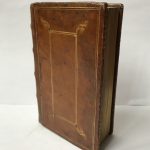 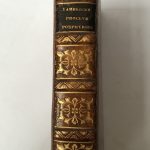 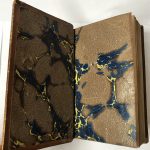 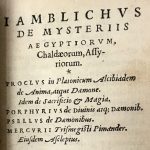 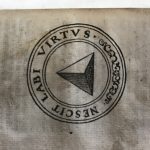 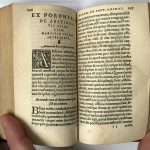 16mo, pp. 543 (i), a-z8 A-L8. Roman and Italic letter. Title page with vignette showing Jean de Tournes’ printers device: a cartouche in shield-like shape bearing the motto “quod tibi fieri non alteri ne fereris”, enclosed in a circle by an ouroboros. Verso of final leaf with pyramid within a circle and motto “nescit labi virtus”. Capital spaces with guide letters, decorated initials. Some age yellowing and dumpstaining, affecting especially the second half of the book at lower gutter. Rebacked, marble pastedowns, in C18th gilt ruled calf with central panels on covers and fleurons, gilt spine with raised bands and label with authors’ names, some skilful repairs, a.e.g. Except for some waterstaining throughout, this is an excellent copy.

First Jean de Tournes edition of this collection of five treatises by some chief Neoplatonic philosophers, translated by Marsilio Ficino, which first appeared in 1497 in Aldus’s Venice workshop. ‘De mysteriis Ægyptiorum’ (‘The Egyptian Mysteries’) was written by Iamblichus in the fourth century. It stands as his response to the philosopher Porphyry of Tyre concerning the Egyptian magic and the ritualist interpretation of theurgy (the branch of magic allowing man to communicate with the good spirits). It follows the commentary of Proclus on Plato’s Alcibiades, Porphyry’s ‘De divinis atque dæmonibus’, Psellus’s ‘De Dæminubus’ and finally the ‘Pimander’ and ‘Asclepius’ by Hermes Trismegistus. The latter work is translated by Apuleius.

“This volume is interesting for a number of reasons. It is a 1549 compilation of various writings on demons and magic, followed by the Pimander… The volume is prefaced with a dedication letter from Ficino to Giovanni de’ Medici, in which the Italian philosopher notes that only an ignorant person would believe that demons and magic are not Christian.” (Byrne, 2015).