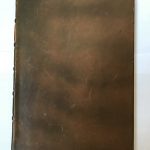 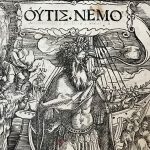 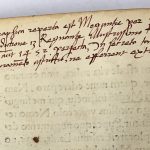 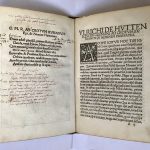 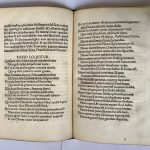 FIRST EDITION of Hutton’s second Nemo, enlarged and revised. 4to, 12 unnumbered leaves, A-C4. Roman letter, sporadic Greek. Title within full-page woodcut vignette of Nemo, who is the protagonist of this short poem, with a scene from the Homeric episode of Ulysses and the Cyclops Polyphemus in the background (work of the artist Hans Weiditz); decorated initials. T-p with thumb marks on margins and two small red ink spots on the illustration. Light age browning on page edges, occasional spotting. C17th extensive red ink annotations on verso of t-p, among them a passage from the poem “De venere” in Eoban Hesse’s scholiastic medical work De tuenda bona valetudine (see 2° ed., 1555, f. 42 recto), and on verso of final leaf (reference to “Johann Faust” [Fust] as the inventor of printing, called “ars calcographica”, in Mainz during the reign of Emperor Frederick III) and underling throughout by the same hand; also other earlier ms. notes. In modern calf over boards with red morocco label to spine. An excellent copy.

This is the second draft of Ulrich von Hutten (1488-1523)’s Nemo, drafted before 1510 and first published in 1516. The author was a German humanist, poet, and a friend of Erasmus. He fostered the reorganisation of the Holy German Empire, promoting its independence from the papacy. Moreover, he had enormous influence on nineteenth-century German culture. In fact, he played a crucial role to forming a German national identity. Hutten supported the revolt against the Archbishop of Trier in 1522, which failed, forcing him to find refuge in Zwingli’s Zurich, where he spent his later years. He appreciated the innovative religious and political stance of Luther and the Reformation.

Thanks to ‘Nemo’, von Hutten gained vast popularity as a man of letters. This poem of 78 elegiac couplets, alternating hexameters and pentameters, was preceded by a long letter of the author to his friend Crotus Rubianus, who collaborated with him on the edition of the ‘Epistolae obscurorum virorum’ (1515-19). No doubt, originally Hutten’s Nemo was only a student’s joke. This second expanded version is preceded by an epigram in which the humanist Konrad Mutian “Rufus” (the mentor of the famous poet Eoban Hesse) addresses Crotus describing in Homeric terms the satirical persona that Hutten adopted in Nemo.

Nemo is not an invention ex nihilo of Hutten. Several other authors dealt with this topic in the Middle Ages. This theme sprang from the literary puns of clerics or monks, who amused themselves by giving an identity to the pronoun “nemo” (i.e. “no one” in Latin), by which many sentences of Ecclesiastes or Psalms begin. Clerics even devoted him a sermon or hagiography. Saint Nemo was popularised by these parodic sermons. Certainly, this character was further informed by that of Homer’s ‘Odyssey’, i.e. the wily Ulysses, who saves his life and that of his companions from the fury of Polyphemus by introducing himself as Nobody. Hutten himself has long been identified with this character: a much-travelled nobody confined to exile. A letter from Hutten to Julius von Pflug, the last Catholic bishop of Naumburg and an early reformer, concludes this work.