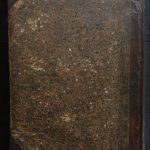 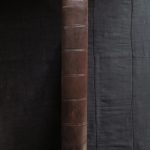 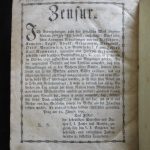 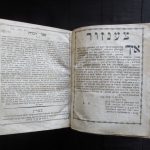 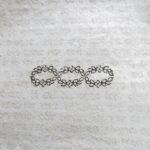 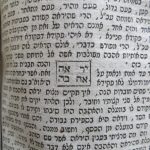 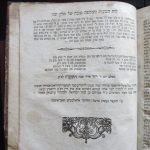 [HOROVITZ, Phinehas Elijah b. Meir],  The Book of the Covenant (Sefer ha-Brit).

FIRST EDITION. 4to. Unnumbered leaves: pp. (4), (264), (144). Hebrew letters of different size, numerous head- and tail-pieces. Title-page with name of previous owner inscribed. First page showing the non-obstat of the Censor of Prague, Karl Fischer, to the publication of the book in German and Hebrew. A clean copy with no marginal notes and only negligible foxing on first few pages, not affecting the reading of the text.  Bound in a 19th-century quartered leather over boards, re-backed; spine divided in 6 compartments by double-fillets. free e-p watermarked with the Dutch ‘Lady of Dort’ mark. A very good copy.

The ‘Book of Covenant’ (Sepher ha-Brit) is a compendium of scientific and traditional Jewish knowledge that was written anonymously by Phinehas Horovitz, in 1797. Horovitz was an expert in kabbalah from Vilnius – a city that was at the centre of a Jewish movement called ‘Hasidism’, aiming to renew the traditional learning system and to update it to the most recent finds of modern science. This book was originally published in 1797 and sold by the author directly; or through the help of a network of distributors throughout Central and Eastern Europe. Besides the written approval of seven rabbis in the preface, a further mark of approval by the Censor was added to the remainders of the first edition almost two years after the circulation of this book has started.

The book is composed of two parts. The first part is a manual of natural science for young students. Although Horovitz’s aim was that of opening to modern science, his way of explaining natural phenomena is included in a religious frame. The second part is more specifically a spiritual work, where Horovitz’s knowledge of Kabbalah is shown in full. Horovitz’s enthusiasm in the result of his writing was expressed by him on many occasions, as he believed this book could bring a real transformation of the ways natural phenomena were perceived by Jews of all ages and backgrounds.

While travelling around Europe to promote his books, a pirated edition of the first part was published by Rossman without the author’s consent and in spite of the warnings that were given in the preface not to republish this book until 15 years have passed. Horovitz found out about this un-authorised version and decided to publish a second revised and expanded edition of this work through being very mindful not to visually divide the first and the second part – just as in our copy -, which could prompt a ‘gentile’ publisher to dissect the whole all-too-easily. The instructions he gave to the following publishers reveal the utmost care Horovitz had in presenting his book in the best possible way. He warned the type-maker not to use abbreviations and to print in clear, readable characters.

This book has had indeed a large influence on Jewish education until very recently. It was reprinted over 40 times and remains a classic of Jewish scientific writing.